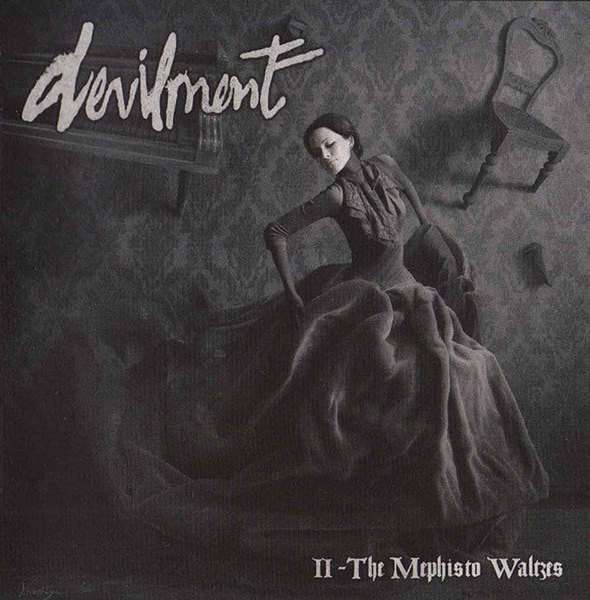 Originally formed by Daniel Finch back in late 2011 amidst a bout of religious delirium, DEVILMENT back then experienced a myriad of problems trying to hold down a stable vocalist (the rope, I believe, was never quite strong enough).Enter Daniel’s friend Dani Filth (CRADLE OF FILTH, TEMPLE OF THE BLACK MOON), who, although not entirely stable mentally, agreed to help out on a couple of tracks, having some time off from his other projects. Dani Filth comments, “When I heard what Dan Finch was doing, I just had to get my claws into it. It had a unique sound to it that was both creepy and heavy, but indelibly groovy. I instantly saw where we could take this beast...”This then turned swiftly into a studio demo, completed after Dani finished work on CRADLE’s album ‘The Manticore and Other Horrors’, in late Summer 2012.The demo, known as ‘Grotescapology’, featured eight tracks, which, although psychotically competent, were used solely as a backbone for a new line-up when their drummer departed to tour with IRON MAIDEN's Steve Harris, with the remaining two members blowing away in a storm one night.Fortunately at this point, destiny, sat on a posturing horse, was proud to usher Nick Johnson (Bass), Colin Parks (Guitar), Lauren Francis (Vocals & Keyboards) and Aaron Boast (Percussion) into the fray - four extremely competent musicians who suddenly grew out of the local musick scene, much like fruitful mushrooms on a slightly rotten log (here comes the ‘fun guys’ analogy!).And soon the band were at full steam once more and starting to write as a combined unit.The debut, entitled ‘The Great And Secret Show’, is a monolith of pure unadulterated metal madness and is unlike anything that you would expect to come from the craw of Dani Filth. Classic heavy and groove-laden riffs combined with a soundtrack ripped from a Hitchcock flick, are infused with insane melodies and a roaming evil-eye for the avant garde. Plus the artwork, undertaken by Drake Mefestta, is an incredible walk-through of megalithic proportions and destined to drop jaws to the floor.Lyrically the album is centred around the poetically macabre; part Roald Dahl, part HP Lovecraft, part Tim Burton, all Dani Filth, with songs about exonerating the Hindu Goddess of Death and Rebirth; Celebrating the band's Witch County origins; Murderously unstable relationships; Exotic cinematic women; Mind-altering Victorian drugs and the phantasmagorical beauty that exists behind the thinly veiled curtain of existence.Thus 2014 was an exciting year for DEVILMENT with a cracking debut album recorded for Nuclear Blast records; a European tour with LACUNA COIL and MOTIONLESS IN WHITE and with serious interest afoot, the band are poised - a fully armed and operational battle-station ready to deliver the goods amid their musical postcards from the Darkside.Two years on from the jarring impact of their debut, DEVILMENT are once again primed to unleash fresh terror upon an unsuspecting world. With a refreshed line-up and a renewed sense of momentum, Dani’s crew have meticulously pieced together a second blood-spattered batch of deranged anthems that brings vastly more colour, intensity and lyrical versatility to this band’s spectral palate. Entitled ‘Devilment II: The Mephisto Waltzes’, the second DEVILMENT record makes no splintered bones about its nefarious intent, offering a bewildering torrent of disparate and demented ideas and delivering them with refined, ultra-gothic panache and several jolting doses of Dani’s trademark verbal subterfuge.

Dani Filth clearly knows what he likes, and doesn’t really deviate from it ever too often. Sometimes an artist’s work reflects their interest far too much, over pumping the audience with too much of the same thing. In the case of the new Devilment record II – The Mephisto Waltzes (Nuclear Blast), it finds itself in an odd middle; while admittedly nothing musically mind-blowing, it is a fun as hell ride to partake on.With Dani heading the band there isn’t too much that rings close to a Cradle of Filth sound. If there is anything remotely close, it is in the beat by beat vocal flow that he’ll tackle when it comes to speedier sections in songs. This is more prominent in tracks like “Shine On Sophie Moone”. The band actually has more in common with acts like The 69 Eyes (while obviously more intense, and far less poppy). It is a strong example to give you an idea of the playfulness in the lyricism, as well as instrumental structure that the music follows from start to finish.Which honestly, is the selling point to II – The Mephisto Waltzes. This album is ungodly catchy in the best way. From the minute opening track “Judas Stein” starts, it is a fun run all the way to the end. What makes this possible is the fun horror lyricism (like “Hitchcock Blonde”), and strong vocals of both Dani and Lauren Francis. The tracks where they are together are dangerously addictive (such as “Under The Thunder” and “Full Dark, No Stars”). This energy can be found within the instrumentals as well, but more of an aura then technicality. It is fair to say that the instrumentals are just average quality at best; while never coming off “bad”, just “good” enough to get by. If anything were to stand out it is when there are any bits of shredding or hefty moments of gothic-like note effects. These elements are the most recognizable in the pre-mentioned “Judas Stein” and in “Life Is What You Keep From The…”.Perhaps Devilment wasn’t aiming for fun, but that is what they succeeded in. You won’t find crazy time signatures, dynamic ranges in vocalization, or prog anything. What you will get out of II – The Mephisto Waltzes is a pure trip of dark bliss. If it hasn’t been made clear yet, the instrumental aspect to this album is quite simple, and more geared towards a niche crowd. And while it is a fun record, it never achieves anything beyond that (which again depending on the listener can be a huge positive, or straight up negative). One will know if this is really meant for them within three songs to be honest. But for those who are already fans, there is enough here to keep them entertained. This record is a goth rock/metal treat with terrific hooks and overall catchiness sure to at least grant a smile out of its whimsical nature. While the direction of the goal is blurred, what Devilment achieve is a good time.