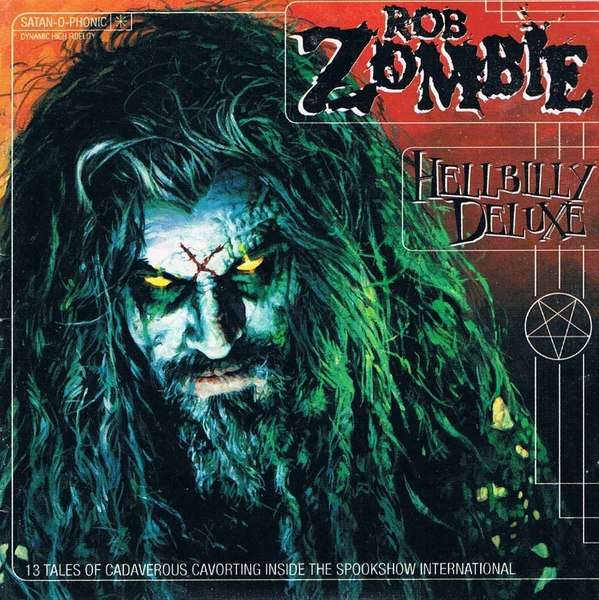 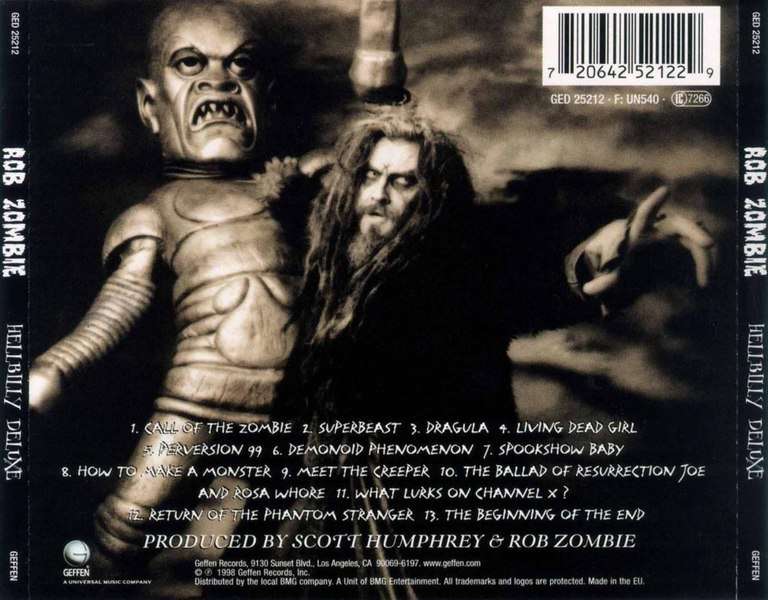 Rob Zombie (born Robert Bartleh Cummings;January 12, 1965) is an American musician, film director, screenwriter and film producer. He rose to prominence as a founding member of the band White Zombie which formed in the mid-1980s and rose to fame in the early 1990s. As a solo artist, he has released five studio albums, three compilation albums, two remix albums, a live album, a video album, and 15 singles. In 2003 he expanded his career and became a film director, and has directed a total of six films, the majority of which he also wrote or co-wrote. He has also released numerous brands of comic books, and appeared as an actor on numerous occasions.White Zombie's debut album, Soul-Crusher, was released in 1987 and was followed by their second album Make Them Die Slowly in 1989. They rose to prominence after the success of their third album, La Sexorcisto: Devil Music, Vol. 1, and its lead single "Thunder Kiss '65" in 1993. The album went on to be certified multi-platinum by the RIAA, for sales exceeding two million copies in the US. Their fourth and final studio album, Astro-Creep: 2000, became their first top-10 entry on the Billboard 200, and their second album to reach multi-platinum status.Zombie began his solo career with the release of his 1998 debut album Hellbilly Deluxe. The album was both a critical and commercial success, spawning three hit singles, reaching the Top 5 of the Billboard 200, and selling over three million copies worldwide. Hellbilly is Zombie's highest selling album to date. He followed the success of the album with The Sinister Urge in 2001, which had similar success to that of its predecessor. Zombie's first greatest hits album, Past, Present & Future, was released in 2003, and reached Platinum status by the RIAA. His third studio album, Educated Horses, was released in 2006, and was his third Top 10 entry on the Billboard 200. In 2010, he released his fourth studio album Hellbilly Deluxe 2, which is a sequel to Hellbilly Deluxe. His fifth album, Venomous Rat Regeneration Vendor, was released on April 23, 2013.Following his success as a musician, Zombie began directing, writing and producing films. His first film, House of 1000 Corpses, was completed in 2000, but numerous struggles with the distributor led to the film's release being delayed until 2003. Its sequel, The Devil's Rejects was released in 2005. In 2007, he released his third film, a remake of the 1978 classic film Halloween. The film went on to gross over $80 million, the highest-grossing film in the Halloween franchise. In 2009, Zombie released a sequel for the film, titled Halloween II. In 2009, Zombie released his first animated film, The Haunted World of El Superbeasto, based on his comic book series of the same name. His film The Lords of Salem was released in 2013. Zombie bought the rights to a film about the Philadelphia Flyers, titled The Broad Street Bullies, though no release date for the film has been announced yet.Zombie directed the majority of White Zombie's music videos, as well as numerous videos for his solo work. Zombie's lyrics are noted for their horror and sci-fi themes, and his live shows for their elaborate shock rock theatricality.He has sold over 15 million albums worldwide, and had six Top 20 hits on the Billboard Hot Mainstream Rock Tracks chart in the United States.

Hellbilly Deluxe: 13 Tales of Cadaverous Cavorting Inside the Spookshow International is the solo debut studio album by American musician and filmmaker Rob Zombie. The album serves as his first release outside of the band White Zombie, with whom he released two multi-platinum studio albums. Hellbilly Deluxe was released on August 25, 1998 through Geffen Records.Musically, the project portrays Zombie's love for classic horror films with heavy metal and electronic music. The album's lyrics speak of murder, chaos, and supernatural forces. The majority of Hellbilly Deluxe was recorded in California, and was produced by both Zombie and Scott Humphrey; Zombie is credited as the sole writer on all of the songs.Hellbilly Deluxe was released to a generally positive critical reception, with the album's production being praised. The album proved to be a commercial success, reaching the top five of the Billboard 200 and selling over three million copies in the United States. Hellbilly Deluxe outsold all of Zombie's releases with his former band, and established him as a successful solo artist. The project appeared on multiple charts worldwide, though failed to duplicate the success it had in North America. Since its release, the album has garnered the title of a "shock rock classic" by numerous publications.The album was preceded by the release of Zombie's debut single, "Dragula". The song was a hit in the United States, and appeared on the singles chart in the United Kingdom. "Living Dead Girl" was released as the album's second single, and achieved a similar amount of success as its predecessor. The album's third and final single was "Superbeast", which failed to emulate the commercial performance of the album's first two singles. All three of the songs were used extensively in the media, appearing in various films and video games. "Dragula" is often referred to as Zombie's signature song, and remains his highest selling single worldwide. Hellbilly Deluxe is Zombie's most successful album to date.