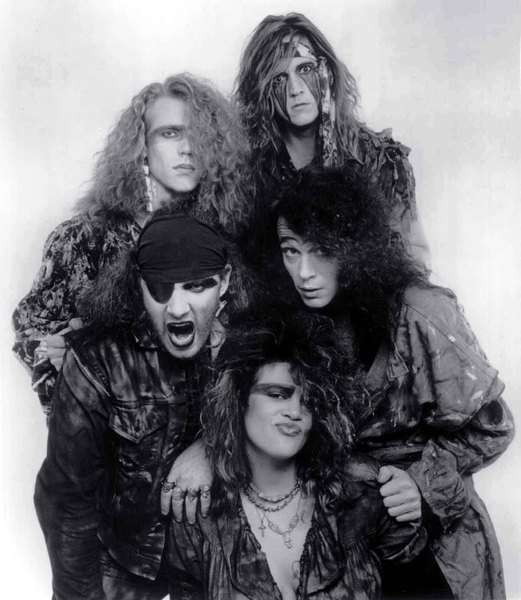 Slave Raider was an American Hard rock band formed in 1985 that was known for its over-the-top antics, heavy make-up and glam song lyrics. In the 1980s, the Minneapolis music scene was primarily known for The Replacements, Soul Asylum, Hüsker Dü and Prince among others. In the Twin Cities, Slave Raider had a sizeable following that were known as "The Raid". They opened for such 1980s bands as Ratt and Poison with the original lineup.The band recorded three albums in the late 1980s and early 1990s, but were never able to make much of a dent in the glam metal scene of the time due to the beginning of the grunge movement that has been attributed to the influence of their fellow Minnesotans, The Replacements.The band was dropped by its record label following their third album release in 1990 and broke up soon after that with the band members going on to solo projects. The original line up has periodically reunited since then to perform the occasional reunion show that is always "standing room only".The song "Youngblood", written by Slave Raider members and performed by Slave Raider, appeared in the 1994 movie entitled The Paper, which was nominated for an Oscar.Slave Raider's "Make Some Noise" (written by Slave Raider and D. Nagel) appeared in 1988's License to Drive.

For Hard Rock fans and collectors, having the two major-label SLAVE RAIDER albums on CD has been akin to finding the Holy Grail. Since neither offering from the costumed Minnesotans sold a lick on CD, finding a copy would typically cost a small fortune.Now, after almost 30 years since Slave Raider's debut was released, you can get both albums freshly remastered courtesy of the sage pop metal purveyors at Divebomb Records.The first Slave Raider album Take the World By Storm is a really good one, but my favorite always was their more ambitious 2nd CD "What Do You Know About Rock 'N Roll?".Like Kix on the East Coast and Y&T in Northern California, Slave Raider’s core fan base was in the Twin Cities, and thus, their over-the-top image was easily drowned out by more popular national acts like Twisted Sister, WASP or Lizzy Borden, despite their sound & style took a lot of those same cues as well.For "What Do You Know About Rock 'N Roll?" Slave Raider got famed producer Chris Tsangarides (TNT, Gary Moore, Thin Lizzy, Yngwie Malmsteen) who helped them add a more melodic polish to their sound.You hear that especially in the opening tracks “Is There Rock N' Roll In Heaven?” and "Youngblood” the latter of which got some decent radio play and rotation at MTV Headbanger's Ball.They also made the second half of the album some kind of concept about a dystopian future where Rock music is a crime, ending the CD with one of the best versions of Thin Lizzy’s “Jailbreak” you'll ever hear.Originally released in 1988, "What Do You Know About Rock 'N Roll?" was one of the best US Hard Rock albums of the year, sadly pretty ignored due to the poor promotion provided by RCA/Jive Records.The term 'cult classic' gets tossed around pretty freely, but in Slave Raider’s case it is completely appropriate. Here’s a band that had a wild look, an even wilder sound, and that went beyond the normal party rock clichés."What Do You Know About Rock 'N Roll?" is quite unknown for many Hard Rock fans, not strange as the album never was reissued and with copies being sold for over $200.Now you have the opportunity to discover a band that should have been huge with this excellent Divebomb Records remastered reissue including expanded artwork.