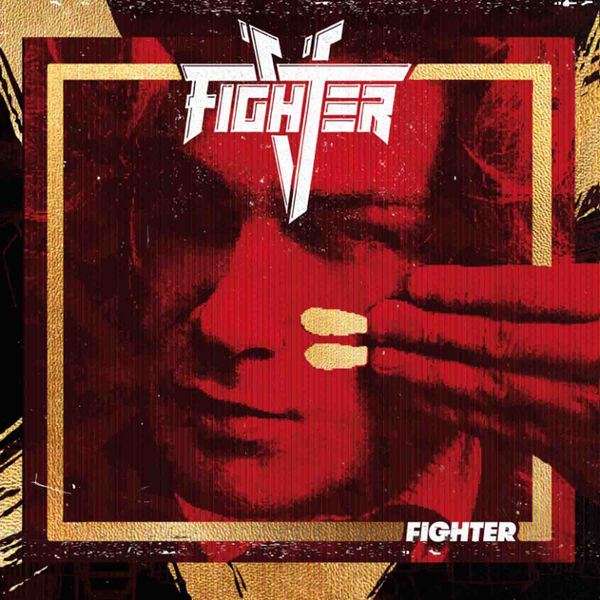 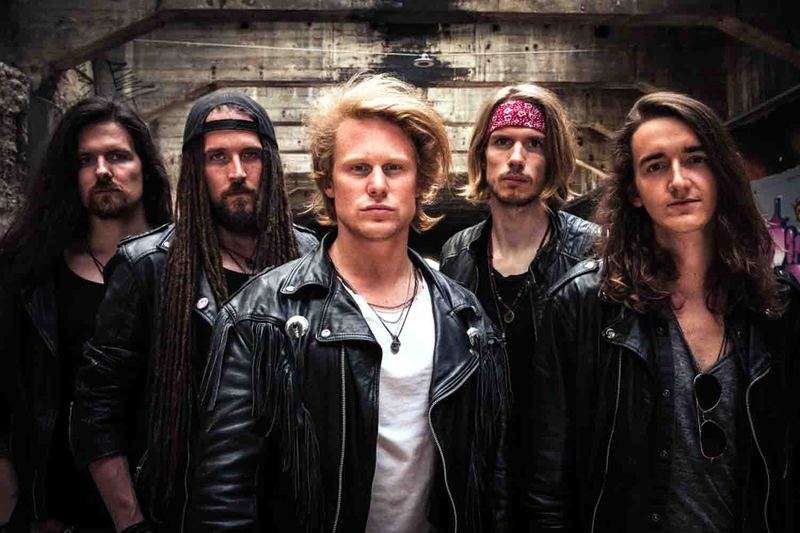 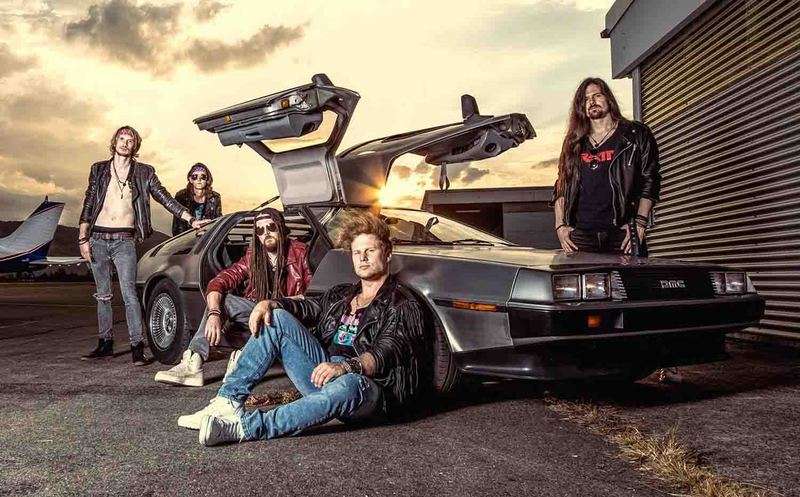 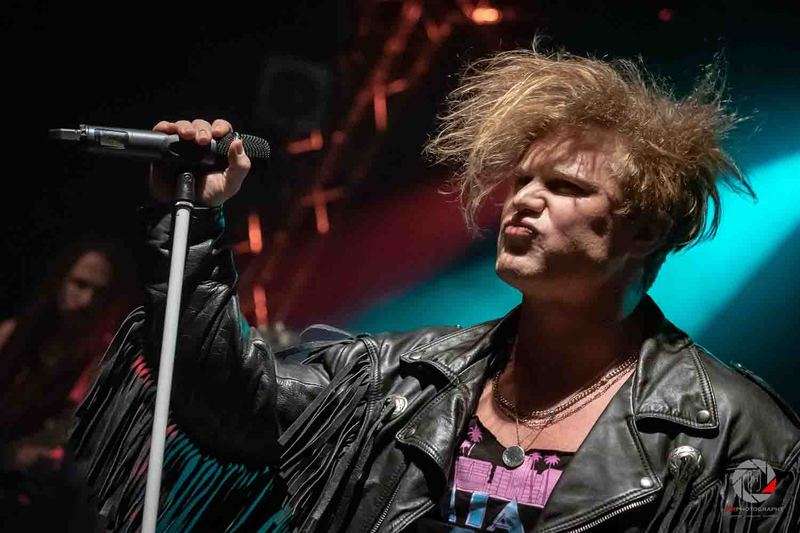 Considering the circumstances under which Dave Niederberger (vocals) and Marco Troxler (guitar) laid the foundations for Fighter V on a Saturday night, they are almost like the cliché of an exaggerated autobiography of a ragged rock star of the 80s.Because just like every weekend, the two moved back into this bar, in the middle of the old town of Lucerne. Named Spelunke was always far and wide as one of the last bastions of rock music. It is tight, confusing, cigarette smoke smokes from all corners, the alcohol flows in streams and the volume of the music is at the pain threshold of the bearable - But as I said, they play rock music, which counts alone!It was long after midnight, and a couple of beers had flowed, while the boxes were filled with classics by Bon Jovi, Whitesnake, Journey, Survivor, and Def Leppard. It was this powerful sound that only had a logical consequence in the minds of the two young boys: we want to do that too! Contrary to all trends and contrary to practically everything that could be heard on the radio. Their shared passion for rock music of the 80s left no doubt as to where the project should go from the beginning. Stadium skirt without ifs and buts.When the idea had lost none of its significance in the days after, the two set out in search of like-minded people. The search went smoothly at the beginning. A bassist is quickly found in the person of Luca Troxler, as he still lives in the same household as Marco Troxler. And in the closer circle of colleagues one found with Lucien Egloff a drummer with stage experience. Much more grueling, however, was the search for a suitable comrade on the keyboard - and yes, keyboard was and is a must for the sound of Fighter V. Various attempts failed because of the fact that the goals of the 4 existing members and the keyboarder are not compatible left. Sometimes with keyboarder and then again without the band played about 50 concerts a year. Among other things in the opening act of bands like The Dead Daisies, Fozzy, Bonfire or Molly Hatchet, the band made a name for itself as an energetic live act.Hoping for epic keyboard sounds almost abandoned, the band met Felix Commerell in the spring of 2018. Although a bit younger than the rest of the band, it soon proved to be a powerful support for the intended sound as well as organizational issues within the formation.Inspired by a new tailwind, the five Swiss knew that now was the time to record an album.Every free minute of isolation in the bandroom was ahead of the songwriting trio Dave, Marco and Luca. Often there were only a few chords and the vocal melody or the lyrics at the beginning. And then it was tried out, tinkered, written, changed, discarded and rewritten. To the point where the result sounded convincing to all three. Nine months passed so before one dared to approach the demos with some producers. The echo came promptly and positively. Finally, they decided on the producer Jona Tee (keyboarder of the band H.E.A.T). His bright enthusiasm for the sound and the fact that he already produced some bands from the Melodic Rock genre, was able to convince the band. And let's be honest, who does not want to spend 4 weeks in Sweden to record a rock album?With nothing but a dozen carefully selected demos and a shared love for Stadium Rock, they embarked on their journey north. In the spring of 2019, the album FIGHTER was created there in close cooperation with producer Jona Tee.The trip to Sweden and also the new entry of Felix had given the band so much exciting, fresh air that it was time to give the project a worthy name.To the title track of the album FIGHTER, the band quickly made a close bond, in particular its message: "Do not give up, stay tuned, keep moving forward". Provided with the small complement of the Roman five "V" FIGHTER V was born.The song material aroused the interest of various labels and distributors. After intense talks and negotiations, Fighter V signed in the summer of 2019 at Rock Attack Records, Germany.A total of 4 singles are released before or after the release of the debut album with music video. The debut album FIGHTER will be released on October 11, 2019. Followed by a support tour for THE NEW ROSES and a headliner tour of Central Europe, Fighter V faces an exciting future.

Just when it seemed the revival of the ’80s wave had reached the top and began to show signs of saturation, here we have some young Swiss guys keeping the flame alive with a debut album that is the quintessence of Eighties AOR / Melodic Rock: FIGHTER V and their first CD “Fighter”, tweaked by talented Swedish producer Jona Tee (keyboarder in H.E.A.T).Everything in Fighter V, from the band’s logo to aesthetics and, of course, the music, is a celebration of that golden decade.Pure and simple, “Fighter” is a collection of instant melodic rock hymns made for the arenas, spiced by luxury AOR melodies.If you look at the circumstances under which Dave Niederberger (vocals) and Marco Troxler (guitar) laid the foundations for FIGHTER V on a Saturday evening, they almost resemble the cliché of an exaggerated autobiography of a rock star of the ’80s.Just like every weekend, the two were drawn back to this bar in the middle of Lucerne’s old town. Long after midnight, a few beers were sure to flow, while the speakers were full of classics by Bon Jovi, Whitesnake, Journey, Survivor and Def Leppard.It was this vivid sound which in the minds of the two young guys only led to one logical consequence: “We want to do that, too!”Contrary to every trend and practically everything that could be heard on the radio, their common passion for rock music of the ’80s left no doubt from the beginning where the project should go.Stadium rock without ifs and buts!The band waste no time in delivering huge, massive anthems since the start with the thunderous “Dangerous”, and if you don’t have enough just check “Frontline” or “City Of Sinners”, killer pumping rockers that easily could’ve graced the Iron Eagle movie soundtrack back in 1986.Perhaps it’s me, but tile track “Fighter” brings to my mind the Bon jovi sound circa ‘7800º Fahrenheit’, then more ‘action movie’ references appear with “Can’t Stop The Rock” which perfectly connects with the emblematic ‘No Easy Way Out’ by Robert Tepper.Then Fighter V show the most pure AOR side with the delicious mid-paced “There She Goes”, on the other hand the band delivers their most rocking song in “Looking For Action”, an explosive cocktail mixing the ‘American’ Whitesnake and the most excessive Van Halen.“Into The Night” is pure new wave of Scandi Melodic Rock, and you can hear Jona Tee’s hands here, a racing rocker in the vein of H.E.A.T with splashes of synths all over.The ballad of the album and one of the highlights comes with “Save Your Love For Me”, with melodies carved in crystal keyboards and smooth vocal harmonies, pretty Americanized in style akin Danger Danger.And, as the ’80s are also synonymous of partying and having fun, Fighter V closes the album with the punchy “Turn It Up”, rocking and radio-ready if we were in 1987.Classic 80s Melodic Rock / AOR is alive 2019 and not only comes from Scandinavia: Swiss 5-piece Fighter V keeps the flame alive, young dudes with infinite passion for timeless rocking melodies.