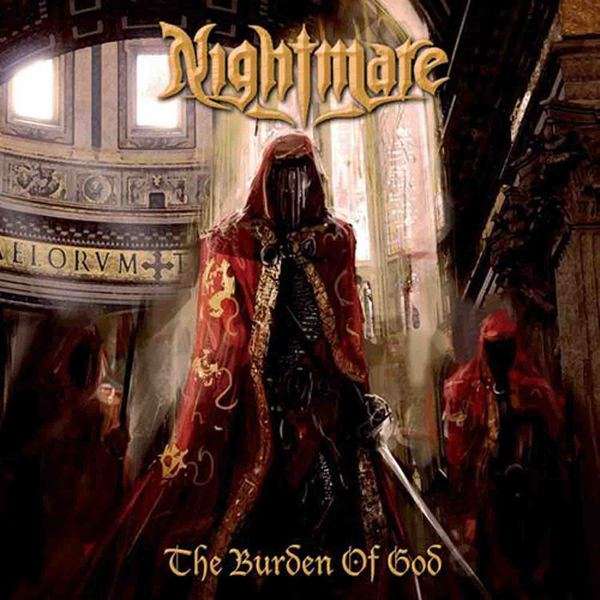 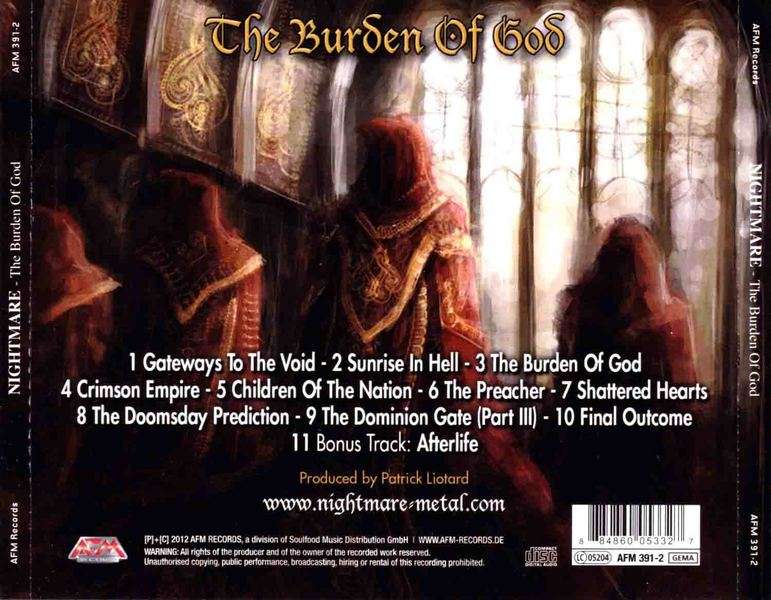 For the past three decades, the French heavy metal pioneers NIGHTMARE are now already an integral part of the European music scene. Although interrupted by a ten-year hiatus (late 80s to late 90s), NIGHTMARE at any time had their fans behind them. And they were never disappointed. This beautiful tradition continues with "The Burden Of God" seamlessly: NIGHTMARE combine their classic heavy / power metal roots with some contemporary elements and show that they are living in the now. In direct comparison with the previous album "Insurrection" (2009), an increase is observed in symphonic elements, so that sometimes the memories of 2001's comeback album "Cosmovision” to be awake."The big difference is," laughs bassist Yves Campion, "that on "The Burden Of God" we have a much better sound." Together with the renowned producer Patrick Liotard NIGHTMARE recorded the album in Marseille, where it also was mixed. For the mastering the band was able to hire Maor Appelbaum (Halford, Therion, Sepultura, Yngwie Malmsteen).In fact, it was then Liotard, who, becoming enthusiastic about the new NIGHTMARE song material, he even contributed two of the songs he has written.“The two tracks ”Final Outcome” and “Afterlife " were written by Patrick Liotard," confirms Campion. "Both songs are not typical for NIGHTMARE, but we liked it so much that we wanted to have them on the album absolutely."Typical trademark of NIGHTMARE from Reunion 1999, the entire album through is the executive, apocalyptic mood. Slightly thrashy power riffs and bloodcurdling voice of Jo Amore do the rest to complete the sound picture. New to the line-up NIGHTMARE welcome guitarist Matt Asselberghs, who replaced the retired JC Jess.NIGHTMARE was founded in 1979 and released their debut album "Waiting For The Twilight" 1984. "Power Of The Universe" was released the next year and should initially be the last sign of life of the band, as it shortly afterwards, due to musical differences, broke up.In 1999 the time had come for a fresh start. This was done with vocalist Jo Amore, who left his position as drummer in the band and from then on acted as a front man. The drumsticks were handed to Jo’s brother David. In the form of an EP ("Astral Deliverance") and the release of the reunion concert of 1999 ("DeLIVErance"); NIGHTMARE made clear: we are back!. With “Cosmovision" the first studio album since the reunion, the highlyanticipated next studio album was released in 2001. After a tour with Saxon followed by concerts with Grave Digger. NIGHTMARE then opened numerous shows for Blind Guardian played several major festivals (e.g. Rock Machina in Spain, Skeleton Bash in Austria and Germany's prestigious Wacken Open Air). The next two albums, "Silent Room" and "The Dominion Gate" were also recorded in Sound Suite Studio. 2007 and 2008 were determined by extensive touring and many prestigious festivals (Hellfest, Gods of Metal, Basinfirefest, Hell Over Paradise, Metal Camp ). With "Genetic Disorder", which again received great critical acclaim in 2007, a new studio album was released too. With “Insurrection" NIGHTMARE made their debut on AFM Records in 2009, 2011 they released "One Night Of Insurrection”, the live show for 30-year band anniversary at DVD / CD and went on tour with Sabaton.With "The Burden Of God" NIGHTMARE now return again with a superb new studio album. And they prove that they are still the best heavy metal export of France.

When I first received the CD I was quite impressed by the artwork. It's really good job and I think the artwork plays a very important role in an album in general and this one is no different. After all, when Metalheads go to Metal shops, they want to buy something that will grab their attention. Each band should be unique on the artwork of their albums, because there will be about a fraction of a second to draw one's eyes. That same attention should grab a buyer that will pay for the album itself. I think that NIGHTMARE did it really good!Now, after being done with the artwork, let's focus on the material. The album begins with a very interesting intro ("Gateways To The Void") which somehow reminds me of the French style. I don't know how I can explain this orchestra theme, but I will just say that even if you are going to give me this intro without telling me that the band from France, right away I will understand that they are French. Without giving our ears even one second of peace the second song comes in. Its name is "Sunrise In Hell" and I think every Metalhead that loves 80's Heavy Metal is going to like it. The guitars are really good, the drums work perfectly and the singer (Joe) is amazing. His voice reminds me of Ronnie James Dio. This album came to me just in time because it was almost 2 years without him. And this singer reminds me him in the "Mob Rules" era.The next song "The Burden Of God" is very enjoyable Heavy / Power Metal tune with great drum solo, guitars that hold the song in the highest level, and of course the vocals doing the most amazing work (and the lyrics too). Another really good song is "Children Of The Nation" which I think one of the best songs on the album. But hey everything is perfect around here. There just can't be more perfect song to end the album like "Afterlife".As in previous occurrences, this is album suggests that the band is really professional. It is simply a very accessible and highly enjoyable Metal album from a respected band that has been around for about thirty years. Usually after 30 years the musicians start to lose it and every time we read an interview with some great Rock star, in which the reporters ask him about the band's best album that was released long time ago. They all answer the same: "We were young…". But now NIGHTMARE! I think every album is better than the other, so I guess the guys can never actually say that "we were young" phrase I guess…