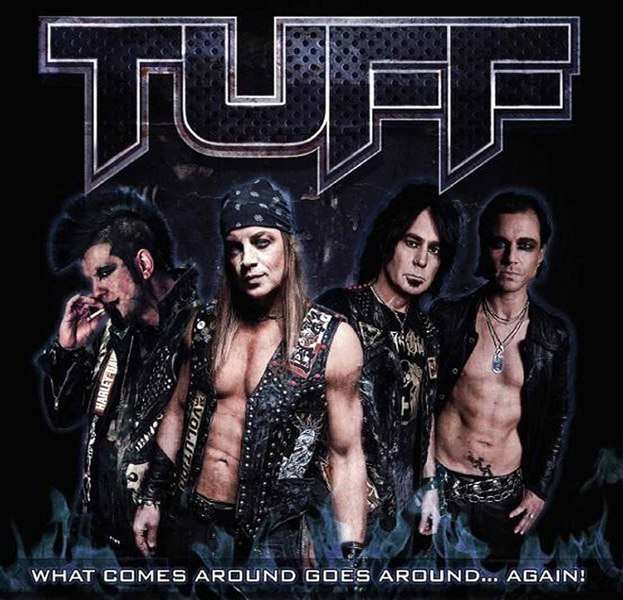 Tuff is an American glam metal band formed in 1985 in Phoenix, Arizona, by guitarist Jorge DeSaint (born George Manos) and bassist Todd Chase (born Todd Chaisson). The band was completed with the arrival of drummer Michael Lean (born Michael Raimondo) and short-lived vocalist Terry Fox, who left the band shortly afterwards to pursue an ice skating career. With replacement vocalist Jim Gillette, the band recorded a four-track EP entitled Knock Yourself Out. However, Gillette soon departed to form Nitro and was replaced by Stevie Rachelle (born Steve Hanseter).Tuff was signed in 1990 by Atlantic Records, and released their debut album What Comes Around Goes Around in May 1991, in which the band released the hit power ballad "I Hate Kissing You Goodbye". In 1995, Tuff's independently-released Fist First was reissued by BMG as Religious Fix, with the addition of three bonus tracks.In 2001, Tuff released the compilation CD The History of Tuff, which included the song "American Hair Band", a parody of Kid Rock's "American Bad Ass" (both of which incorporate the instrumentals of Metallica's "Sad But True"). "American Hair Band" made references to numerous similar bands of the era as well as criticizing grunge and alternative rock.Tuff released What Comes Around Goes Around Again in 2012, which featured four rerecorded songs from What Comes Around Goes Around plus new tracks.

It's been 25 years since TUFF hit Sunset Strip in Hollywood California. To celebrate that anniversary (1987-2012), the band has issued "What Comes Around Goes Around... Again!" The CD will hit the street March via the band's own independent label (RLS Records).The core that remains of the once self-proclaimed "biggest unsigned band in the world" is vocalist Stevie Rachelle and bassist Todd Chaisson. The newly recorded tracks were produced and mixed by Michael Raphael (JAILHOUSE, NEVE) with a laundry list of '80s stars appearing throughout. The group will also adopt a new stage look and persona going forward says Stevie Rachelle — who was "from hell" according to a Hollywood promoter who nicknamed him that in the late '80s. That isn't far off from the new stage name — $tevil. The bassist and founder of the band, will re-assume his old stage identity of Ch@se. Not a new comer as the groups drum throne has been occupied by Tod Burr since 2001. Going forward he will simply be known as T Drums! However, the band does welcome new blood with S'olin on lead guitar. The Swedish-born Staffan Osterlind has played and toured with Paul Di'Anno (ex-IRON MAIDEN) and BLACK ROBOT (featuring former members of BUCKCHERRY)."What Comes Around Goes Around... Again!" is not just a remake, but also a revisited disc of memories for Ch@se and $tevil. "This disc was a few years in the making, from the idea, to the actual sessions," says Rachelle. "I wanted to remake some of these songs — as our Atlantic Records debut was discontinued years ago. Fans see the YouTube videos, then want a quality copy of these songs but there isn't one out there. Now it's here.""We had some tunes back in the day that use to be fan favorites, and this time around we added them. 'Put Out Or Get Out' is us putting the metal back in hair metal!" says the youngest Chaisson with a bass. Todd Chaisson comes from a family of bass-playing brothers. All with heavy metal roots. Oldest brother Greg Chaisson played in BADLANDS with Jake E. Lee and Kenny Chaisson with KEEL. "'What Comes Around Goes Around' — the song didn't even make the album with the same name. Not sure why, but it missed the cut yet we kept the title" $tevil says. The title track also features world-renowned shredder Jeff Loomis (ex-NEVERMORE) on lead guitar and Stephen Pearcy (RATT) on some classic backgrounds. Also included are a half dozen of the bands earliest re-mastered demos that feature the "classic hair band" lineup of TUFF: Stevie Rachelle - vocals, Todd Chaisson - bass, Jorge DeSaint - guitar, Michael Lean - drums.The band is realistic about where they stand, and what will happen says Ch@se. "We're not going to set any records like we did when we sold out all those Hollywood clubs. We played them all, Gazzarri's, The Roxy, Troubadour and the Whisky A-Go-Go. We'll be happy to enjoy the rest of this ride. I am blessed and honored to be a part of this all these years later; that alone makes this a success."