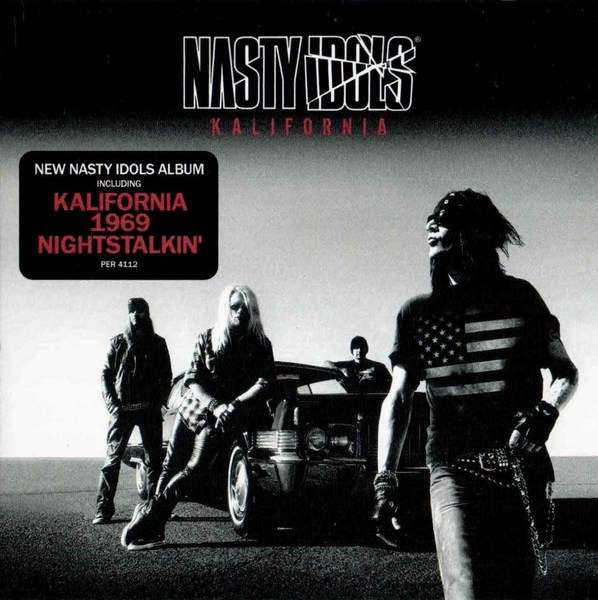 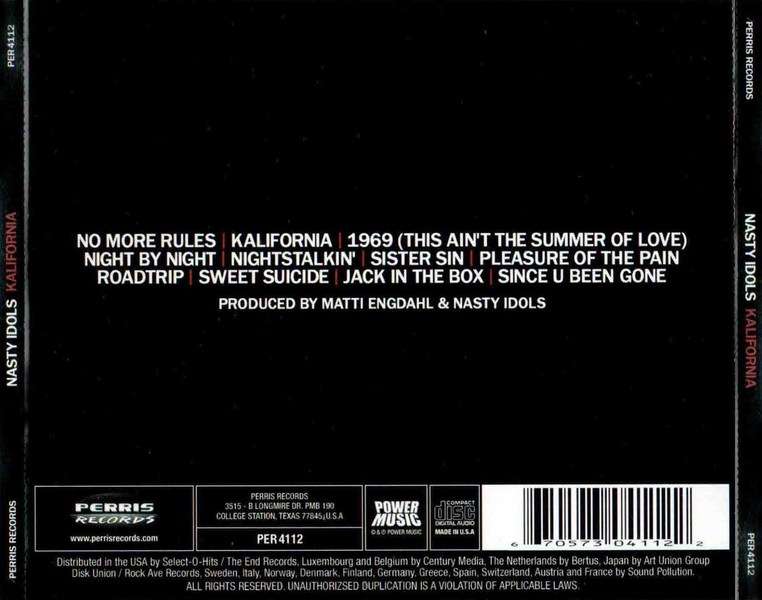 Nasty Idols were a glam metal, hard rock band from Malmö Sweden, which was formed in 1987. After the band split in 1995 they reformed in 2006. Since then the band has released a fifth studio album Boy's town and a sixth album Kalifornia. Band frontman Andy Pierce died in 2013.The band first formed in 1987 with the lineup of Andy Pierce on (Vocals), Jonnie Wee on (Lead Guitar), Dick Qwarfort on (Bass), George Swanson on (Drums), Roger White on (Keyboards) and were more of a straight up Glam Metal in the style of bands such as Mötley Crüe, Poison & Hanoi Rocks. Their first gig was played at a local festival in Sweden taking inspiration from such acts as early Mötley Crüe, Kiss, Sweet and Alice Cooper. After the release of their self-financed single Don't Walk From Love/Easy Come, Easy Go they signed to independent label HSM/CBS Records. Their debut record was released soon after in 1989 named Gigolos on Parole which then followed by more shows and an ever increasing fan-base.Changes were soon made in the band's line-up resulting in Peter Espinoza coming into the line-up to replace Jonny Wee on (Lead Guitar) which led to recording of some of the first tracks for their next record. In 1991 the band released Cruel Intention which was greeted by a number of high rating reviews from numerous magazines. "Cool Way of Living", "Can't Get Ya' Off" and "Trashed N' Dirty" had music videos recorded for them and were played heavily on MTV's Headbangers Ball. The album was soon released afterwards in Germany and Japan.In 1993 the band released their third record, Vicious. The album did not do as well as their previous record, due in part to the decreasing hold the Glam Metal sound was having at the time over the mainstream. Interest was moving more to the new sound of grunge popularized by bands such as Alice in Chains, Nirvana and Soundgarden. Most hard rock bands resorted to changing their core sound to more of a darker and heavier tone as an attempt to pique interest in the genre. "Heads Down (In Tinseltown)" and "Ain't Got Nothin" were made as videos; the latter being a much darker one than previous releases.By 1994 the grunge wave had all but created a mass of lost interest in the glam metal genre which increasingly made life even harder for most bands. Some even resulted in using drugs a lot more as bands were not making much money from gigs or record sales. Peter Espinoza left the band at this time to move on with other projects that he had. A fourth record was known to be under development at the time named The Fourth Reich but the label soon went bankrupt before the record was finished. The record would later be released in 2002 as Heroes for Sale by Perris Records. The band split up in 1995.The band's remaining members tried their best through the years to survive through a more degrading music industry. The most notable band being Majestic, Peter Espinoza's brainchild, which enjoyed success in Japan, as well as vocalist Andy Pierce's band Machinegun Kelly and later United Enemies. American label Perris Records later re-released all of the band's studio record's including a best-of and 1995 record The Fourth Reich renamed as Heroes for Sale.As 2006 came the band was announced as playing a reunion gig at the Sweden Rock Festival. This was later followed by the release of The Rejects on the Road tour. Throughout the same year the band played numerous shows in Sweden which were then followed by playing gig's and touring in Italy and the UK. The band spent much of 2008 recording their follow-up to Vicious and Heroes For Sale named Boys Town. The 12 track album was later released on April 27, 2009 through Metal Heaven records. The record was met with a warm reception from fans, and some percentage of the media that still knew of the band outside of Sweden.The band went for a short break in 2010 to ready themselves for a comeback with them playing a few shows in the year. On their official website the band named a few songs for the next record; "Kalifornia", "Nitestalkin", "Without Mercy", "Jack In A Box", "Roadtrip" and "No More Rules".Kalifornia was released on July 3, 2012.On February 27, 2013, the band revealed via their official website that founding member Dick Qwarfort had decided to leave the band.On December 5, 2013, frontman Andy Pierce, the last remaining original member of the band, died suddenly at the age of 45, from a brain hemorrhage.It is currently unknown whether the band will continue in light of recent events.

Swedish Hard Rock never stopped with the band EUROPE, it's not all about "The Final Countdown". It all began back in 1987 when Sweden didn't know that one of their biggest Sleaze / Rock N’ Roll legends will pop out of Malmo. NASTY IDOLS started in Sweden what PRETTY BOY FLOYD did in the U.S.A but with a little more attitude and ballsy music. Back in the days when Metal ruled the world providing the chance to watch the real deal on MTV’s Headbanger’s Ball, NASTY IDOLS videos weren't a matter of question, especially if they were going to be played on the night’s show. Their breakthrough supplied them with a worldwide expose from Europe to Asia.The band kept rocking by the hands of their leader Andy Pierce until its breakup in 1995 due to the rise of the Grunge genre that hit the Glam Metal scene all over the world. At 2006 the band re-united and had a successful concert at the Sweden Rock Festival, which opened the door for them once again. Now they released their 6th new album "Kalifornia" that contains 80's Metal spirit that would lead you back to the past, as if the present never existed.The album opens with the track "No More Rules", a typical Glam Metal riffing for the genre in the veins of L.A. Glam bands that reminded me a lot of the TIGERTAILZ stuff. The self title track "Kalifornia" delivered a good into, starting with a redneck / Southern oriented singing style and turning to heavier Hard Rock melodies. This is Glam Metal with a boost, has that fine Rock N’ Roll atmosphere but even dirtier. The guitar solo provides us additional shred licks which makes it unique and evil like the molesting singing rhythms of "We All Gonna Die". Another hit single is "Night By Night", Hard N’ Heavy song that started with a tension and showed the Heavy Metal side of NASTY IDOLS. The song is catchy and with a sing along chorus that won't leave anybody just standing without head banging."Sister Sin" really reminded me PRETTY BOY FLOYD mix with MOTLEY CRUE’s early stuff. I couldn't believe it's a new song. Unfortunately in general there wasn't any special thing here, it's a typical Rock N’ Roll formula but the song got good vibe and lots of fun in it especially when the chorus is backed only with the drums in the middle, which meant to give it an additional drive.I found the song "Pleasure Of The Pain" as the best song around, the killer chorus is doing the whole work, I must recommend the good the awesome drumming work of Rikki Dahl with his interesting breaks through the song."Roadtrip" is another great track, little bit darker and heavier than the rest of the songs, especially because the pre chorus part which shows that it’s one of a kind.Through the end of the album the songs are getting better, another sticky track is "Sweet Suicide", very tight song with the rhythmic guitar the set the base to the song. Andy shows his sleazier singing end, rougher, dirtier and in your face.I would like to spell a good light once more on Peter Espinoza'sguitar work through the song "Jack In The Box" that will slice your heart into 2 pieces, the solo presents the it can be done differently than what we used to know so far in the Glam Metal guitar solos."Kalifornia" brings a fresh sound with good memories from the sunset strip area, it has rudeness, uncompromised and with balls.