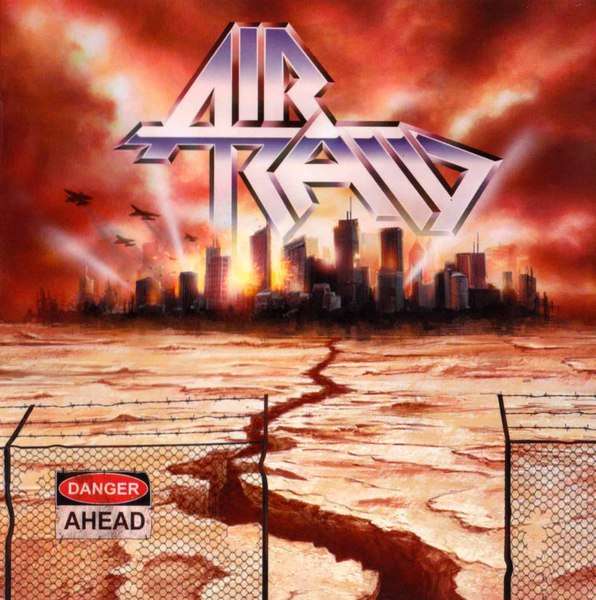 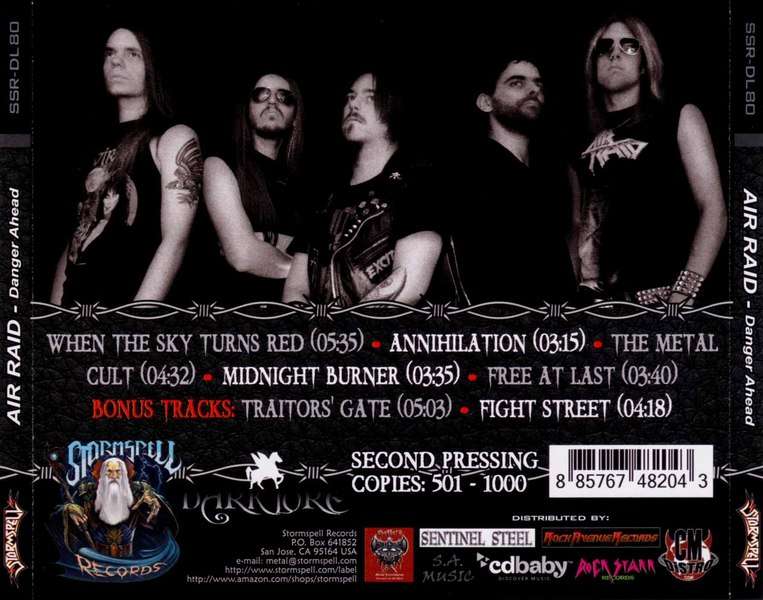 Air Raid was formed in 2009 by Andreas Johansson & Johan Karlsson.Sweden, Sweden and no end. The newest Metal sensation from the land of the Tre Kronors comes for a change, not the flat land, but from the city of Gothenburg. We are talking about Air Raid. Founded in 2009, two years after the first CD-EP called "Danger Ahead" in 2013 followed by the debut album "Night Of The Axe". In April of the same year the legendary Air Raid "Keep It True" festival endowed off an equally legendary visit. There was an acclaimed performance in Japan (along with Girlschool) as well as a tour of Italy, Spain and Portugal.After a singer exchange took Arthur W Andersson (vocals), Andreas Johansson (guitar), Johan Karlsson (guitar), Robin Utbult (bass) and David Hermansson (drums) in June 2014, the work on its first high-roller Plate "Point Of Impact "in attack. The eight tracks on the album show influences of Judas Priest and Iron Maiden to Riot and Chastain (seasoned with a small portion in the form of Teutonic Metal Accept and Grave Digger).With numbers like "Bound To Destroy," "The Fire Within" or "We Got the Force" "Point of Impact" is a clear improvement over the first LP. Guitarist Andreas thinks the same: "The new album has failed altogether a little more melodic and the song writing is definitely higher quality than on> Night Of The Axe '. But that was a natural development and due to the fact that Arthur has a more classic hard rock voice. I have written almost all the music and the vocal melodies themselves. The lyrics I shared with bassist Rob. "Air Raid are about to book an extensive tour of Europe. In addition to a video for a song from the new album "Point of Impact" be rotated. In the meantime, every headbanger should extensively lead the eight songs on the record to heart. It is worth it.

It's no secret Sweden's a veritable hotbed for killer "traditional" heavy metal in the vein of Ambush, Black Trip, Enforcer, In Solitude, Night, RAM, Portrait, Steelwing and Wolf, to name a select few. Another commendable band worthy of inclusion is Gothenburg's Air Raid, which just released what might be its most savory album, Across The Line, following a couple other doozies, 2012's Night Of The Axe and 2014's Point Of Impact. "Comme il faut", these were auspiciously preceded by a strong prototype EP in the precisely half-hour long seven tracker Danger Ahead, released under the reputable Stormspell Records - purveyor of stellar fare such as Ancient Empire, Hellhound and Shadowkiller - and while it may sound a bit plain and generic at first, on closer inspection proves its worth by way of upper-ranged yet virile vocals, solid, sustainable guitar/ bass riffs and well-rooted/ rounded drumming not to mention ravishing and at times downright zestful leads on behalf of Andreas Johansson and Johan Karlsson (whose spot has recently been filled by Magnus Mild), which duly honor similarly modeled twin-guitar incursions such as fellow countrymen listed above.Unsurprisingly, this EP starts off with an alarming air raid siren - as with Black Sabbath's "War Pigs", or to a lesser know extent, H-Bomb's "Attaque" - before a trilling guitar riff leads the listener towards victory, further propelled by Michael Rinakakis' semi-epic vocals (he's now been replaced by Fredrik Werner) and Robin Utbult/ David Hermansson on bass and drums. While the drums resound prominently, the bass sounds a bit lost in the mix, except for the last three tracks, two of which are gleaned from the 2011 demo, "Traitor's Gate" (also a deadly NWOBHM band) and "Fight Street", which offer a fine taste of what's to come production-wise on later albums, notably the last one (to wit, I've only heard "Northern Lights" but it's definitely a step up thanks to its commanding bass line and sparkling, hallucinatory solos). Anyhow, this EP surely takes off with "Midnight Burner" and its mid-paced drum roll giving way to some finely woven, expressive leads before a crisp return to form and further eloquent verses on behalf of a by-now fully engaged front man.Possibly my go-to track for this EP is "Free At Last", as it showcases both the guitarists' ambitious (and relentless) fretwork as well as a much stronger bass line, at times sticking out by way of its glorious "poing!", which does a wicked job of giving this song a particularly compelling and original flair. Considering the band has striven hard to define itself and find its niche amongst its peers, Danger Ahead represents ground zero in terms of development. Alternatively, expect to be reeled in fast by its most recent offering, the utterly fantastic Across The Line, which duly establishes Air Raid as a winning contender.