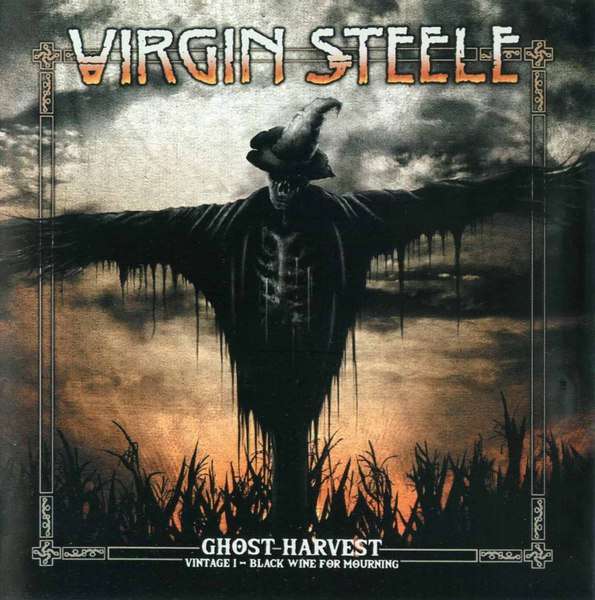 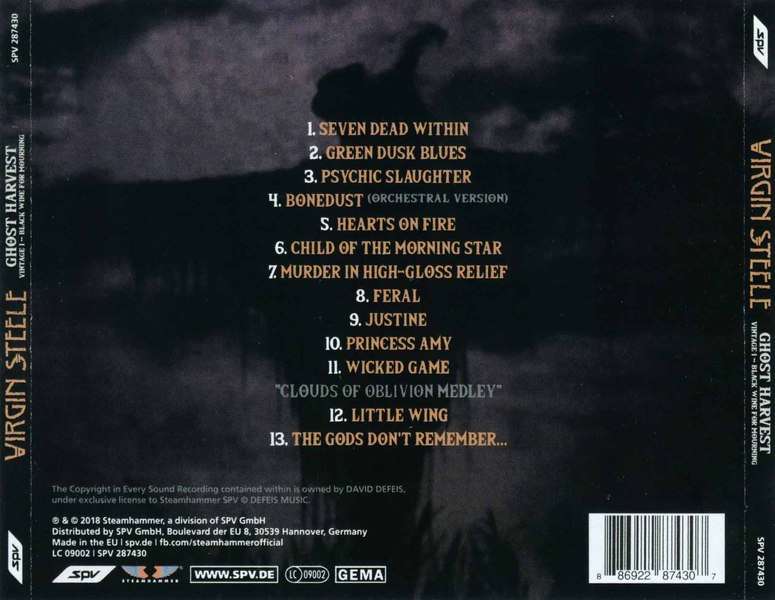 Virgin Steele is an American heavy metal band from New York, originally formed in 1981.The band released a few career highlights albums (Noble Savage, The Marriage of Heaven and Hell Part I, The Marriage of Heaven and Hell Part II and Invictus). In recent years, they have enriched their sound with elements of musical theatre, progressive and symphonic metal, developing and writing projects such as the Metal Opera "The House of Atreus" (based on Oresteia and the Greek myth related to the Atreides) in 1999/2000 and the soundtrack for an imaginary movie Visions of Eden (A Barbaric Romantic Movie of the Mind) aka "The Lilith Project" (based on the Sumerian legend of Lilith) in 2006.

The most under rated power/ heavy metal band on the planet earth, Virgin Steele has just put out a box set called Seven Devils Moonshine. Included is a new release called Ghost Harvest (The Spectral Vintage Sessions) Vintage 1 – Black Wine for Mourning. Black Wine for Mourning features the one of the best vocalists on the planet, David DeFeis, two and a half octaves of excellence. Virgin Steele has evolved into much more then just a typical heavy / power metal band. This album is more on the heavy metal/ Hard Rock side with touches of power, prog, blues and classical. David has defied the odds and this finely aged song writer is getting better with age. It is possible that the preservation of David's great voice is due to Virgin Steele's lack of commercial success and the grind this can put on ones voice.Let's continue the controversy with this. The last Manowar album The Lord of Steel has been bashed on by haters and fans that have hit the wall and refused to give it a fair shake. Manowar's The Lord of Steel is one of the most solid/ pound for pound Manowar albums ever made. Not Manowar's best, but without a doubt top 5. This 2018 Virgin Steele release Ghost Harvest (The Spectral Vintage Sessions) Vintage 1 – Black Wine for Mourning is Virgin Steele's version of Manowar's The Lord of Steel. Start throwing the rocks!The album starts off with a track that is destined to be a Steele classic, Seven Dead Within is a track that includes all of the for mentioned genres. The track is classic Virgin Steele Infused with blues and classical melodies. Track #2 Green Dusk Blues and Hearts on Fire are examples of how Dave is the full package when it comes to orchestration and vocals. His vocal melodies are second to none. Princess Amy is a blues infused heavy metal track. Some of the tracks featured in the middle of this album including Princess Amy (track 10) are as solid are Steele Tracks, remember this is may be the finest 2018 in it's genre, but falls a little short of being Metal album of the year . Track #8 Feral is one of those tracks (like the Heaven and Hell era) that everything seems to come together, drums, guitars keys and vocal working like a well oiled machine.Classical masterpieces like Psychic Slaughter would have Wagner banging his head. Wagner would love David's orchestration.This album also includes Bluesy / Heavy tracks like Justine, a vocal masterpiece. Excellent ending to the story with remakes of Chris Isaak's Wicked Game and Little Wing by Hendrix . Like Jorn, David is able to make a pop rock song as metal as it gets.Out of all of the power/ heavy metal elite, because of consistency both Manowar and Virgin Steele in the last 15 years have left the so called elite in the dust. This album comes in 2 forms. Individual release and a very affordable box set that includes 2 earlier releases and ton of remakes! Thumbs up for making the re-issues affordable.Metal Archives wanted more when it came to my original draft, that was a gift. I was able to deconstruct this album from beginning to end. The Rating went from 82 to 85%. Really there is nothing else that can be said about this album except if you like talent then this albums is for you. I caught that Rock. Frank THE MORBID ONE The Metal Authority Family