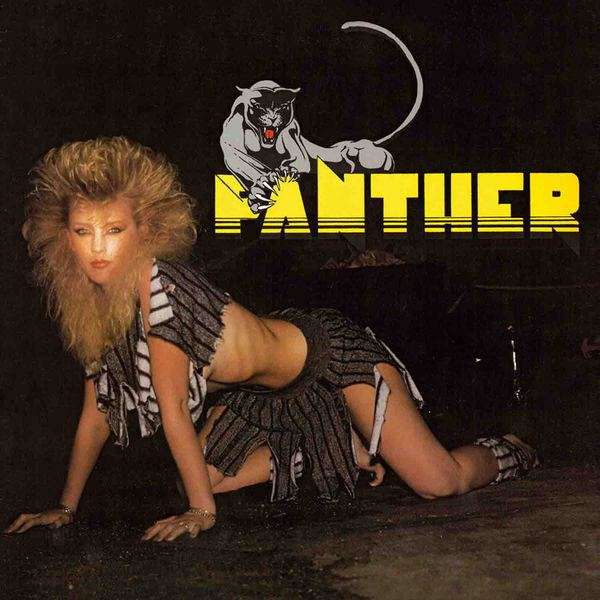 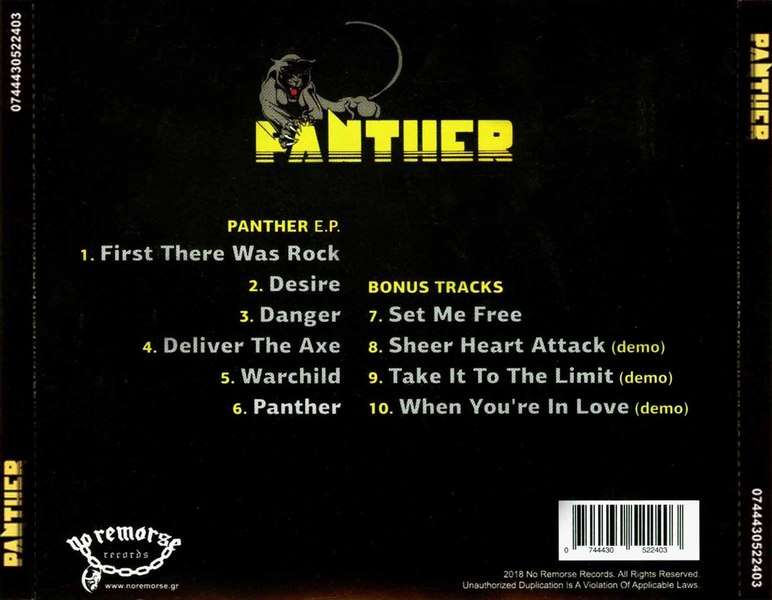 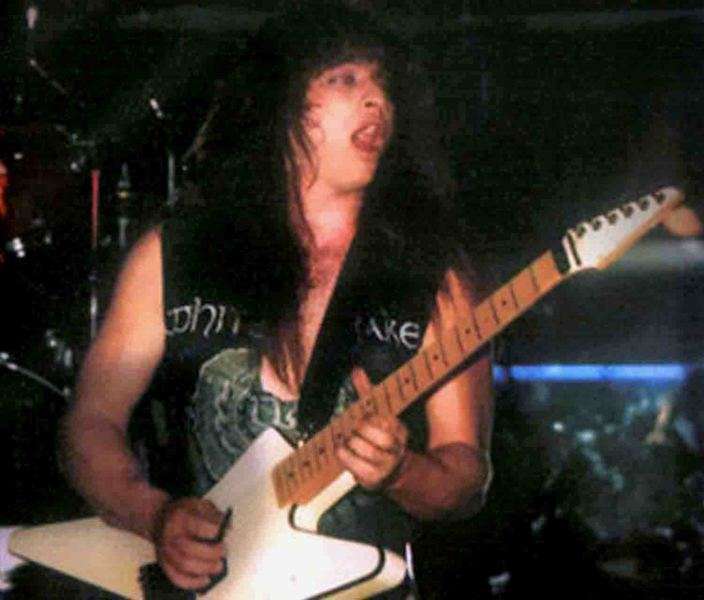 In Los Angeles in 1984 the musicians Glen Davis (bass), Jeffrey Urbach (drums), Graig Alan Cook (guitar) and David McDonald (vocals) founded the heavy metal band PANTHER. After a few resignations and departures, Glen Davis stood alone in the rehearsal room and found new musicians in Mike Barrish (guitar) and Scott Taylor (drums). Only one singer was missing. Since PANTHER got the chance to release a record on the Half West Records label, PANTHER signed Jeff Scott Soto, who sang two albums for YNGWIE MALMSTEEN in 1984 and 1985, the right vocalist. Soto was not firmly in the band but only as a guest vocalist.In 1986, the same plate was released. Even though the album with 6 songs was a bit too short, it is still a kind of reference disc. These songs are for eternity, you can not do better here. Every single song is a bulwark of hardship. Although Soto sings skillfully, his voice is harder, rougher and punchier than on the two MALMSTEEN albums. All 6 songs, really have no weak points, are good rockers with driving riffs and a powerful rhythm section.Also in 1986 PANTHER were represented on the "LA Steel" sampler with the previously unpublished song "Set Me Free". This blast was sung by Soto in the same session as the 6 songs of the debut disc. PANTHER were in good company on the sampler. Beside SAVAGE GRACE, BITCH, LACE, CIRTH UNGOL, PANDEMONIUM, STAINLESS STEEL, RUTHLESS and STORMTROOPER, the hottest newcomers of the US metal scene presented themselves.After Jeff Scott Soto had finished his short stint, the cast carousel turned again. With Michael F. White, a new bass player joined PANTHER and guitarist Mike Barrish got a second guitarist, Jason Giordano. In T.J. March also found a new shouter. In the new line-up, PANTHER recorded a 3-track demo in 1989. Among them was the QUEEN cover version "Sheer Heart Attack" and the original composition "What You Do To Me".Only a few months later PANTHER broke up.Jeff Scott Soto appeared with the band HOUSE OF LORDS in 1988 and was hired by AXEL RUDI PELL in 1992 as a new singer.In 1993 Reborn Classic released the PANTHER debut album together with the KUNI disc "Looking For Acton" on a CD. With this archival on a Silberling PANTHER have then still received the well-deserved accolade. This leaves the eternal memory of a band and a single album that was an absolute classic, is and remains!

Before becoming world-wide famous, mighty vocalist Jeff Scott Soto fronted the short-lived band PANTHER, which self titled mini-LP "Panther +4" has been reissued / remastered for the first time including 4 bonus tracks.Indeed, Jeff Scott Soto enjoyed global recognition as part of Yngwie J. Malmsteen Rising Force and over the years has become one of the greatest Rock frontmen in the world. But as happened with all rock stars, Soto paved its way to stardom performing at sweaty clubs and small venues.Inspired by bands like Scorpions, Iron Maiden and Judas Priest, Panther was formed in Los Angeles in 1984 and started with live shows at the legendary Troubadour, where bands like Van Halen and Guns N' Roses got their start.A young, big haired Jeff Scott Soto impressed the audiences with his incredible set of vocal pipes, and Panther rapidly became one of the hottest new names in the LA circuit.It was necessary to put Panther songs on tape, and the band recorded a set of songs to be released as mini-LP, a format widely popular in the '80s for novel unsigned bands.But just after the recordings of “Panther”, Jeff Scott Soto left band when Yngwie Malmsteen's manager made a phone call, and the rest is history.“Panther” was finally released in 1986 and became an underground sensation, and a much sought after collectible.The 6 songs are firmly focused in traditional hard rock / classic metal, driven by sharp guitars and of course, Soto's powerful vocals. All are very good, strong compositions and really well recorded / produced.This No Remorse Records remastered reissue includes as bonus track a song only appeared in the original cassette version of “Panther”. As extra, there's 3 more songs recorded later with new vocalist TJ Mach, which, let me tell you, is very good at the mic as well.“Panther” not only serves as Jeff Scott Soto's early work historical document or rarity / collectible, it's a very strong album in its own right. It's a very solid piece of first half of the '80s American hard rock / metal, strong and rocking. They don't make albums like this anymore....Jeff Scott Soto always sung awesomely, even in his pre-pro younger years, and you can appreciate that all over this disc.