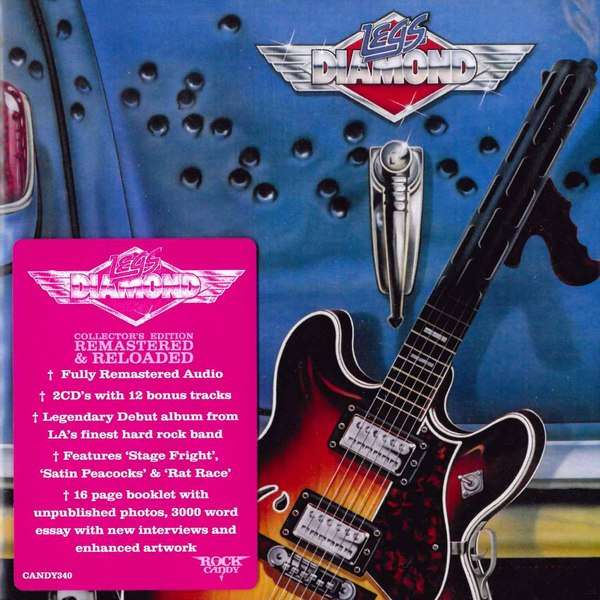 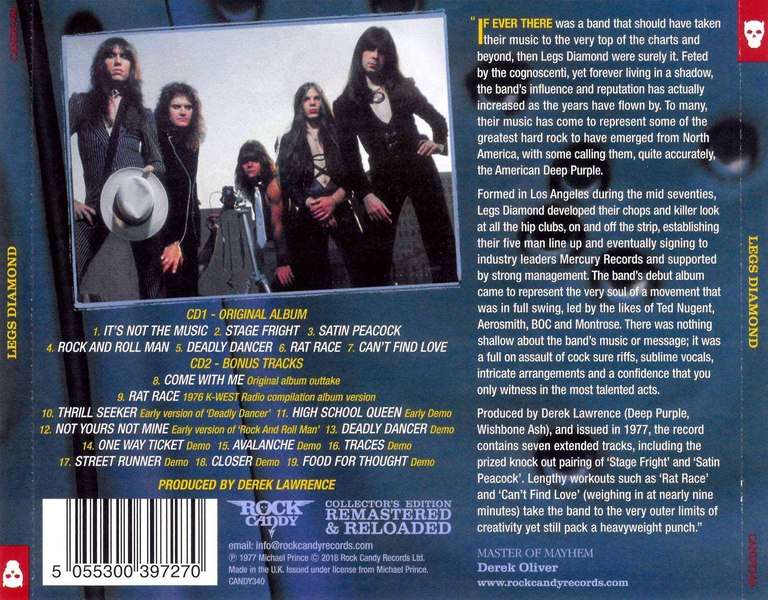 Legs Diamond is an American rock band that has often been called "The American Deep Purple". They formed in Los Angeles, California starting with Michael "Diamond" Gargano (bass) and Jeff Poole (drums). The group released their self-titled debut album for Mercury Records in 1977. The original band broke up in 1980 after three popular albums, but reformed in 1984 after their original albums had begun to acquire a cult following.The new lineup released several more albums and continued to perform throughout the 1990s and 2000s. In 2005, original frontman Rick Sanford was replaced by ex-Montrose and Wild Horses vocalist John Levesque, and the band released their latest album, "Diamonds Are Forever", in 2006. Original members include Roger Romeo (guitar), Michael Prince (keyboards/rhythm guitar), and Jeff Poole (percussion). The band still does the occasional gig in the Los Angeles area and at least once a year in San Antonio, TX where they are still hugely popular, the result of being a favorite of influential disc jockey Joe "the Godfather" Anthony (1940-1992).Keyboardist Michael Prince is active in studio recording, in Los Angeles, working with some better known R+B and Pop Acts, including Beyoncé, Chris Brown, Usher, Los Lobos and Michael Jackson.Guitarist Roger Romeo is also currently working in a new band called the Funkin Maniacs. Power drummer Jon Hyde (Detective) and NS Stick and bassist Gary Jibilian round out the trio. They are recording a new CD slated for release early 2012.As of 2011, the band was working on their 12th CD due to be available within the year.

Rock Candy Records has just remastered the hard to find, first three LEGS DIAMOND albums, all with a large amount of bonus tracks. The reissue of the band's first album "Legs Diamond [2-CD Rock Candy remaster +12]" even includes a bonus disc with a huge amount of 12 extra tracks.Listed by legendary Kerrang! magazine at No. 33 among the "100 Greatest Heavy Metal Albums of All Time", "Legs Diamond" is a must have in your collection.America was no fit place for young, hard rock bands trying to make a name for themselves during the second half of the '70s - what with the general populace being hopelessly spellbound to the strobe lights reflecting off of disco's dazzling mirror ball.Sure, established groups like Kiss and Aerosmith were still making do (or shamelessly selling out to the enemy), but the going was tough for up-and-comers on both coasts -- e.g. New York's Starz and Riot, and California's Y&T, Quiet Riot, and the soon-to-break-out Van Halen.Often forgotten alongside this left coast bunch was Los Angeles' own Legs Diamond, who were fittingly described, years later, as "the best undiscovered band in America," but nevertheless managed to eke out a deal with Mercury Records in 1976, and delivered this eponymous debut early the next year.Right away, one can tell why Legs Diamond stood slightly apart from their loud, brash, groupie-devouring Sunset Strip colleagues, as their own songs were comparatively sleek, restrained, and marked by a penchant for '70s progressive rock, to boot (of course groupies were still quite welcome).The latter certainly explains the surprisingly sedate stroll and proggy organs draped across album opener 'It's Not the Music,' which duly gives right of way to the pure hard rock territory of ‘Stage Fright’.But it's the album's even more urgent third cut, 'Satin Peacock' (KISS wanted this one, but Legs Diamond said no), that really struts the band's hardest-rocking tendencies, which are later revisited with almost as much gusto on 'Deadly Dancer' and 'Come with Me'.Amid these tracks, though, Legs Diamond continue to indulge their progressive rock streak with the killer 'Rat Race', 'Can't Find Love', and the sleekly ambitious ‘Rock’n’Roll Man’ – an epic, six minute piece that crystallises the essence of the band."Legs Diamond" is a fantastic US hard rock record, when this type of music was done unpolluted and from the guts.This Rock Candy remastered reissue is the definitive, adding a second CD containing not 10, not 11 but 12 bonus tracks. It’s truly an aficionado’s dream, a treasure trove of tantalising outtakes, early versions of songs that made it eventually onto the debut; demos and alternative versions – there’s a rendition of ‘Rat Race’ from a 1976 K-West Radio compilation – a genuine, bona fide obscurity.Arguably, it’s as much of an historical document in the journey of Legs Diamond. Rock Candy have surpassed themselves here.