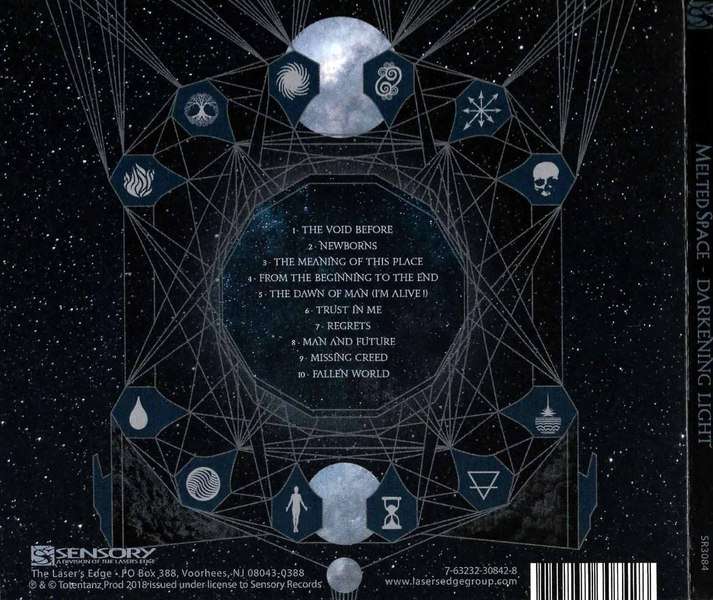 Melted Space is a project created in 2007 by pianist and composer Pierre Le Pape (Wormfood, Embryonic Cells). Influenced by metal, movie soundtracks and electronic music, he tries to create compositions mixing those styles. Here are the roots of a strange “world” : Melted Space! A world that would be the last step of Dante’s journey, a world occupied by lost and forgotten souls which tell their adventures to travelers. Sunk into oblivion, this is their only way to perpetuate their memory.An instrumental self-produced album is recorded in 2009. A new universe opens itself to us, with its thousand facets. The stage is set: dark, obscure and full of memories like those of Dante, the Foucault’s Pendulum and the Sun, which guide us in this first journey.In the meantime, Pierre throws himself into the composition process of a firmly more metal and symphonic album. In the form of an opera metal (the first one ever made in France), he brings us back in a fantastic world where Olympus gods meet with angels and demons.To give life to this epic saga, Pierre surrounds himself with 26 singers and musicians from bands such as Hacride, Destinity, The Old Dead Tree, Carnival in Coal, Kells, Phazm, Gorod…Each member puts a lot of effort into his role, bringing depth and originality to his character or his instrumental part. This leads to a series of unexpected, powerful and rare meetings.« From the Past » is released through Season of Mist in March 2012 and has received a huge national promotion thanks to Replica Promotion. The feedbacks are unanimously positive from the journalists and the audience, and Melted Space is quickly compared to the big productions for the quality of its music and its immersive 81-minute journey.After the strong success of the previous album “From the Past”, Melted Space is back again with an intermediate album full of surprises dedicated to the Romulus and Remus legend. Liv Kristine (Leave’s Eyes) and Ashmedi (Melechesh), along with other singers, are part of the adventure.Melted Space’s strange universe is opening its doors again, just forget hope and let yourself be guided…

All too often a listener will sit down, thoroughly enjoy the first few tracks of an album, only to have their interest begin to wane near the middle or end of the release. This “diminishing effect” is often a result of artists making a concerted decision to place their “best” tracks up front. Artists and managers have been using this technique for decades, especially during radio’s heyday, in order to immediately grab the listener in the hopes that one of their songs would make it onto the airwaves. Playing a disk for the first time and being able to hear the compositions get stronger, having the listener’s interest pique throughout and up until the very end, is one of the great little pleasures that music can bring. Such is the case with Melted Space’s new release “Darkening Light." Recorded and mixed in France by Francois-Maxime Boutault and mastered by Alan Douches at West West Side Music in New York, Melted Space’s new creation picks up where 2015’s “The Great Lie” left off. The mastermind behind the metal opera is Pierre Le Pape, a French keyboardist whose ten new melodic power metal compositions, clock in at just under 50 minutes. Le Pape has again collaborated with The City of Prague Philharmonic Orchestra, which help to provide a cinematic backdrop to the dense metal opuses that fans of Melted Space have come to expect. Le Pape is joined by guitarist Adrian Martinot, bassist Brice Guillon, and drummer Mike Saccoman. Gildas Le Pape adds a blistering solo on “Trust in Me”, one of the album’s standout tracks.A metal opera is typically not complete without a spectacular array of vocalists. “Darkening Light” is no exception. Le Pape gathered some of the finest singers from around the world, spanning many different genres. Listeners can look forward to contributions from Clementine Delauney (Visions of Atlantis, Exit Eden), Sakis Tolis (Rotting Christ), Ailyn Giminez Garcia (Sirenia), Guillaume Bideau (Mnemic, Scarve), Silje Wergeland (The Gathering), Jeff Scott Soto (Sons of Apollo, W.E.T.), Øyvind Hægeland (Arcturus), Catherine Trottman, Lucie Blatrier and more. Many of these names speak for themselves. Quite frankly, it was surprising how well each of the different vocal styles blended together so seamlessly. Listeners are sure to find it refreshing.The rich, haunting compositions are somewhat reminiscent of the “Castlevania: Symphony of the Night” soundtrack. There is a lot for the listener to digest - the orchestration, vocal performances, and lyrical themes which take the listener on a journey through the creation of the world and the ultimate rejection of gods by Man. “Darkening Light’ has a little bit of everything, though it never quite deviates from its melodic power metal core. Progressive compositions such as “Man and Future”, straight forward mid-tempo tracks such as “Missing Creed” and songs like "To the Beginning of the End", with its chillingly beautiful vocal harmonies, help leave lasting impressions that make the listener want to come back for more.While Melted Space has not yet achieved the notoriety or worldwide acclaim of an Avantasia or Ayreon, the undisputed kings of metal operas, this is a very strong release which is sure to put the band on the map. Le Pape’s innovate approach to songwriting is evident on “Darkening Light." This is an album that gets better with each listen and is sure to be talked about by fans new and old.