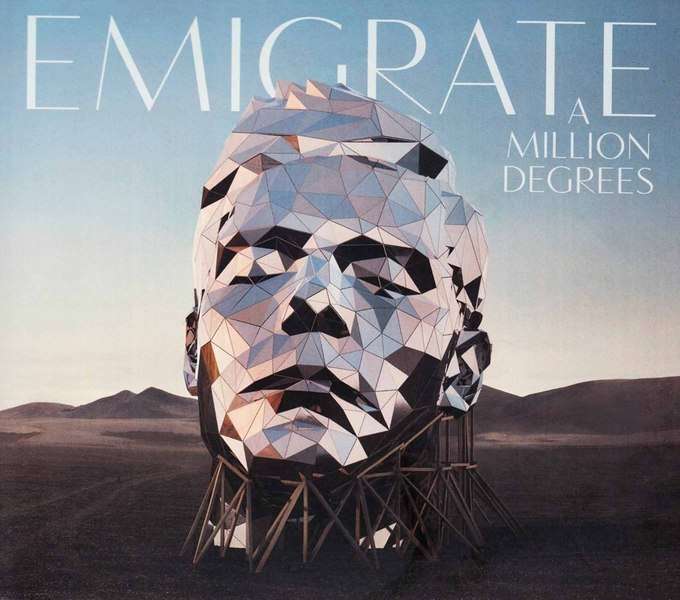 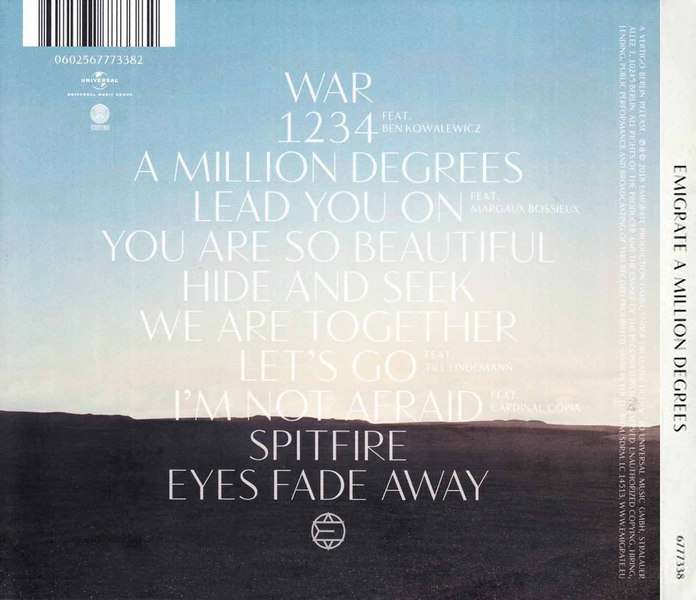 Emigrate is an European alternative metal band based in New York, led by Richard Z. Kruspe, the lead guitarist of the Neue Deutsche Härte band Rammstein.Kruspe started the band in 2005, when Rammstein decided to take a year off from touring and recording. In many interviews, Kruspe says the idea for Emigrate came to him around Rammstein's Mutter era.On September 5, 2006, members of the Rammstein.de newsletter were sent an invitation to the Emigrate newsletter and given the chance to download the song "Wake Up", a sneak peek of the upcoming album. Three song samples were also posted on Emigrate's website: "My World", "Babe", and "Temptation". Fans voted "Babe" as being their favorite, and newsletter recipients were allowed to download “Babe” in its entirety starting November 29, 2006.On May 21, 2007 the Emigrate Official Website opened and “My World” was made available for download, in its entirety, to newsletter subscribers.The video for "My World" has been released and can be viewed on the official website. The video was also included on the limited edition release of the album Emigrate. In addition to the video, My World is featured on the soundtrack to the third Resident Evil movie, Resident Evil: Extinction. The soundtracks to the previous two movies contained "Halleluja" and "Mein Teil" from Rammstein, respectively. On July 27, 2007 Richard made an appearance on Bruce Dickinson rock show on BBC.A video for "New York City" has been released. Richard then left the Emigrate project aside due to Rammstein reuniting in the fall of 2007 to work on their new album Liebe ist für alle da which was released in October 2009, and also to take part in the subsequent Rammstein tour.Joe Letz, who had appeared in the video for "My World", updated the Emigrate Facebook page on June 24, 2011, stating that Richard has been working on a new record.On December 5, 2012, an announcement posted on the Emigrate Facebook page announced that demos were being recorded and reviewed, and studio time was being set up in January 2013 to begin official recording of an untitled second album.In January 2013, Kruspe stated via the Emigrate Facebook page that drums were beginning to be mixed for the new record.In January 2014, Kruspe, on the Emigrate Facebook page, posted that twenty tracks had been recorded for Emigrate and that mixing would be performed in Los Angeles, California, alongside Ben Grosse, with a projected release in the summer of 2014. On March 7, 2014, Kruspe announced the second album was complete and he is departing back to Berlin.On July 22nd, 2014, a post was made to Emigrate's official Facebook page with a teaser trailer to Emigrate's new album, titled "Silent So Long" and an official release date of October 17th, 2014.

The third studio album of the group Emigrate. Till Lindemann (Rammstein), Benjamin Kovalevich (Billy Talent), Pope Emeritus (Ghost) and Margot Baucher (Dirty Mary) took part in the recording of the record.Rammstein Guitarist Richard Z. Kruspe is the genius behind Emigrate, and he returns this Friday, November 30, 2018 via Spinefarm Records, with a truly eclectic collection entitled A Million Degrees. Buckle yourselves in!As a member of Rammstein, the music world’s most explosive live act, Richard Z. Kruspe has been part of a ground-breaking global success story twenty-four-years in-the-making that continues to build and to ignite. Along the way, he’s turned his attention to a number of parallel projects, such as constructing a new studio (and a new home) in his native Berlin, but it’s his decision to launch Emigrate that has given him the greatest chance to satisfy creative instincts outside of the parent company. Beginning with the project’s 2007 debut, eponymous disc, Emigrate built a foundation that, after quite a stretch, was re-strengthened by its follow-up, 2014’s Silent So Long.For their third disc, Emigrate – Vocalist and Multi-Instrumentalist Richard Z. Kruspe, Guitarist Olsen Involtini, Bassist Arnaud Giroux, Live Drummer Joe Letz (of Combichrist), and Studio Drummer Mikko Sirén (of Apocalyptica) – continue to cement their talents and range far and wide, musically speaking. With a pure passion, a lust for making music, Kruspe leads his troops into a truly eclectic 11-song collection. With guest appearances from the likes of Rammstein’s Till Lindemann, Ghost’s Cardinal Copia, Billy Talent’s Benjamin Kowalewicz, and frequent collaborator Margaux Bossieux, A Million Degrees sees Emigrate exploring without musical boundaries – but always with an incendiary passion.A Million Degrees begins with “War,” a bold sound full of synths and guitars that nearly borders on Symphonic Metal. What follows is a completely different sound, where something punkier is injected into “1234.” Here, the straight-up rocker contains a steady backbeat and features Billy Talent’s Benjamin Kowalewicz on vocals. Next, electronic twinges permeate the pores of album namesake “A Million Degrees,” before the track twists on its side and takes a funkier yet still rocking approach. The end result is something that feels like the deliciously catchy love child of Synthpop and Arena Rock.In case you haven’t figured it out yet, no two tracks on A Million Degrees sound alike or fit the same mold. So, for “Lead You On,” Emigrate lean more toward infectiously devious electronics. The candy-sweet vocals of Margaux Bossieux of Slippin Away, a frequent Emigrate contributor, appear herein, providing a perfect contrast to Kruspe’s grit in this wonderful duet. Then, they go almost, dare it be said, Pop Rock for the soaring “You Are So Beautiful,” a catchy love song that would not be entirely out of place in any Top 10 Pop-ster’s repertoire. Don’t cringe: it’s a great song!Still defying all expectations and never growing complacent, Emigrate turn toward a Green Day meets Tiger Army sound for “Hide And Seek,” with some fun Punkabilly flavors inserted in the mix. Almost in response to this rambunctiousness, they initially dial it down to delicate music-box sounds on “We Are Together,” though the track builds up to a wall of sound that is suitably darkly romantic – a perfect threnody for your bleeding black heart.They break out the full-blown Industrial Metal for the infectious stomp of “Let’s Go,” which features Kruspe’s Rammstein bandmate Till Lindemann. Here, the pair’s vocals blend flawlessly, anchoring a rocking track that highlights the very best of what Emigrate is about: catchy, hard-rocking material that defies musical boundaries (and languages). This flows perfectly into “I’m Not Afraid,” a track that is cut from a somewhat similar cloth. Now, it certainly can’t hurt to have one of the biggest (modern) bands in the world guesting on your album, and here Emigrate bring in Ghost’s Cardinal Copia for another addictive, hip-swaying rocker complete with a killer guitar solo. It’s to Emigrate’s credit that they utilize Copia’s vocals to highlight their material, never cranking him up in the mix and blatantly utilizing his name to increase streams. Instead, “I’m Not Afraid” is a track that would be strong with or without Copia.A Million Degrees begins its journey to the end with more blistering rock on “Spitfire,” which utilizes Arena Rock guitars and gang vocals to craft a track that is guaranteed to have live audiences singing along, heads banging. Ultimately, they end with the somber, ballad-esque “Eyes Fade Away,” with massive, melodic choruses that, much like its predecessor, invite audience sing-alongs.On A Million Degrees, Emigrate practice their form of schizophrenic eclecticism and, somehow, it works beautifully. From Industrial Rock to poppier sounds, Synthpop to Punk, Krespe holds nothing back as he goes full-tilt with his sonic exploration. That means that it’s absolutely impossible to categorize Emigrate, which is clearly the goal here: complete abandonment of all stylistic expectations. You might assume that the album’s title, “A Million Degrees,” refers to heat – though, perhaps instead, it is a nod to the one-million sounds explored herein, proudly, boldly, and with a panache that shows Kruspe’s fiery passion for all things Rock. For these reasons,