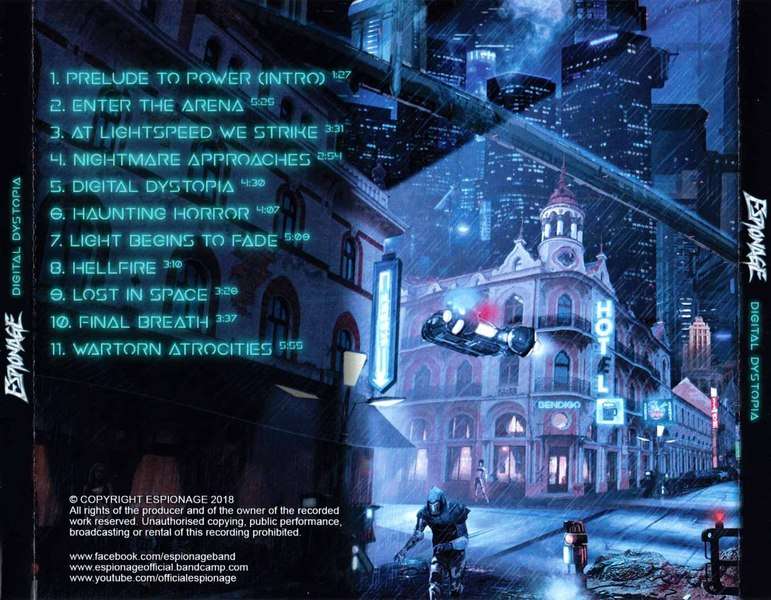 Espionage is an established Heavy Metal band based in Melbourne, Australia that formed in early 2014, and has since been taking the Australian metal community by storm. Their self-titled EP was released in April 2015, with their follow-up Wings of Thunder EP being independently released worldwide on August 20, 2016, which they toured extensively around Australia.The band are best known for their energetic live shows, with high soaring vocals and twin guitar harmonies that are reminiscent of the glory days of Heavy Metal music in the 1980s. Taking influence from and combining Traditional Heavy Metal, Speed Metal and Power Metal styles, Espionage have been described as “a breath of fresh air in a scene saturated with death metal and thrash metal bands” by metalobsession.net.Making their live debut at 2014’s sold out Legions of Steel Festival, an event organised bythe band’s lead guitarist Denis Sudzuka, they have since then supported legendary Australian metal veterans such as Vanishing Point, Pegazus, Eyefear and LORD.The band’s first music video was released on September 15, 2016, which was filmed live at their Wings of Thunder launch show. The video made its television debut on Channel 31 just two days later.Espionage will release their debut full length album ‘Digital Dystopia’ in June 2018, with an Australian tour to follow. ‘Digital Dystopia’ was recorded at Monolith Studios by Chris Themelco (Orpheus Omega, Harlott, In Malice’s Wake), with mastering at The Panic Room in Sweden by Thomas ‘Plec’ Johansson (The Night Flight Orchestra, Elm Street, Scar Symmetry).

Being a big power metal fan and a fan of Melbourne power metallers Espionage to say I was keen for there debut album is an understatement and when it landed in my Dropbox folder a week or so ago, I was not prepared for what I heard….It opens with a Prelude To Power and it really is a prelude to power and the next 10 tracks are nothing short of power…Enter The Arena is the first full track on the album and contains some of the best guitar solos I’ve heard in a long time, featuring Mark Furtner (LORD), Tim Brown (Striker), Brendan Farrugia (Envenomed) and Emir Hot (famous Bosnian shredder) to name a few and its face melting stuff, why settle for one solo when you can have 6 in a row hey Denis??Next up is At Lightspeed We Strike, and that they do this one is a quick paced 3 minute rocker that in sure will go down well in the live set.The solos and shredding don’t stop as Nightmare Approaches the shortest track on the album at just under 3 minutes, the title track Digital Dystopia really pushes Andrew (Frosty) Morris`s vocals hitting the extreme high notes time and time again.Haunting Horror and Light Begins To Fade don’t let go and deliver the goods but for me Hellfire is the standout track on the album, big crushing chorus, drum rolls and solos all wrapped in a neat package.  And with Lost In Space, Final Breath and Wartorn Atrocoties closing out the album will leave the traditional and power metal fans wanting more. All up its a solid album from start to finish and is well mixed too which really helps the band as there is a lot to hear on this release, and they’ve done a great job of producing their work to an amazing listen that has been on high rotation since i received it.Australia has been void of power metal bands of late with Black Majesty, Vanishing Point and Silent Knight being our biggest 3 with this album Espionage have definitely stamped their place in there as well.