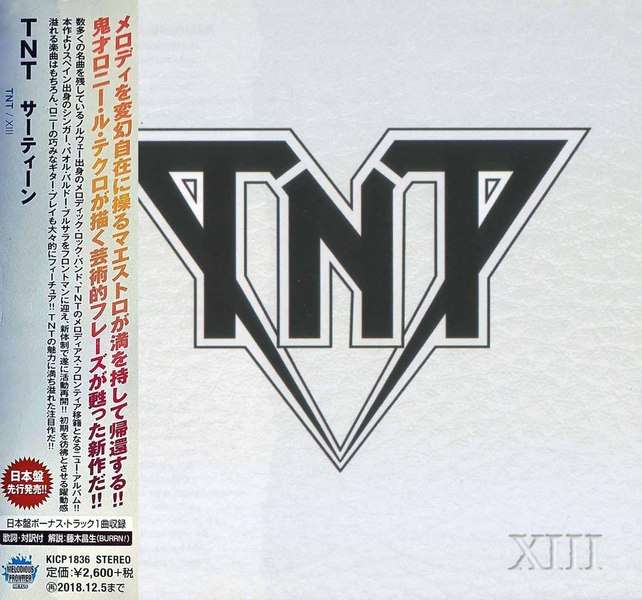 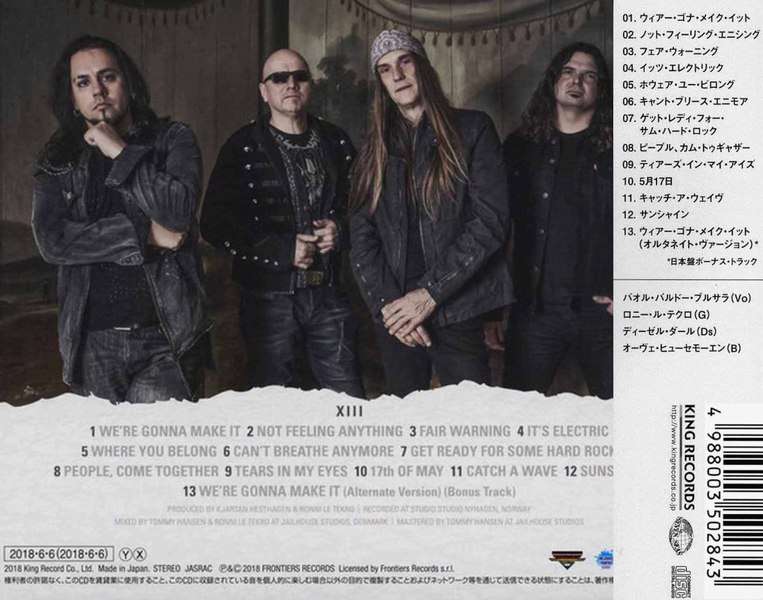 TNT is a Norwegian power metal band from Trondheim, formed in 1982. The band has released twelve studio albums, three EPs and two live albums while going through numerous line-up changes since its formation. Guitarist Ronni Le Tekrø is the only consistent member of TNT. In 2013 singer Tony Harnell returned to the band after a seven year absence reuniting 3/4 of the band's classic 80s lineup.TNT was formed in the Norwegian city Trondheim in 1982, by vocalist and rhythm guitarist Dag Ingebrigtsen, guitarist Ronni Le Tekrø, bassist Steinar Eikum and drummer Diesel Dahl.Securing a national record contract with PolyGram subsidiary Vertigo Norway, they released their self-titled debut album the same year — their only album that features Norwegian lyrics — and got a hit with the single "Harley-Davidson". In August 1983 Morty Black replaced Steinar Eikum on bass, and the following year American vocalist Tony Harnell became TNT's new frontman, making his debut on their album Knights of the New Thunder. His unique and powerful 4 octave range was the final element the band needed to break out of Norway and into the world market. The album was a huge success in Scandinavia and the band then was offered a worldwide deal with Mercury/Polygram worldwide out of New York. Knights was then released in the U.S. in 1984 and the video for "Seven Seas" got heavy rotation on MTV and the album entered the billboard charts.That line-up recorded one more album, Tell No Tales in 1987, before Diesel Dahl parted company from TNT the following year after some turbulent times within the band. Tell No Tales produced TNT's biggest hit, the single "10,000 Lovers (In One)". Tell No Tales marked a slight change in sound from melodic Euro-metal to a more palatable hard rock style, with Le Tekrø and Harnell gaining a reputation as a talented duo. The album was the best selling release in Norway and Sweden that year (outselling hugely popular artists like Michael Jackson and Def Leppard). Tell No Tales also saw the band establishing a mainstream following in Japan and the U.S. Promotional Videos for "Everyone's a Star" and "10,000 Lovers (In One)" were featured on both European and American MTV. They were also featured on Headbangers Ball. The band supported Stryper on a sold out arena tour in the U.S. followed by a tour with Twisted Sister and Great White as well as headlining shows in large clubs in the U.S.Kenneth Odiin became TNT's new drummer and played on TNT's fourth studio album, Intuition, in 1989. This release marked a more AOR-oriented sound, still maintaining a little of the hard rock edge of the previous album. Intuition was another huge success in Scandinavia and Japan. It was also the band's best received American release and saw the band embarking on their first headlining tour of the U.S. which broke attendance records across the country in small theaters and large clubs, thanks to the prominent display of the video for the title track on MTV.

The countdown to detonation begins as Norwegian Hard Rock professionals TNT – Baol Bardot Bulsara (vocals), Ronni Le Tekrø (guitar), Diesel Dahl (drums), and Ove Husemoen (bass) – are set to release their new studio album XIII on Friday, June 8, 2018 thanks to Frontiers Music s.r.l. Produced by studio veteran Kjartan Hesthagen and Ronni Le Tekrø, the album title XIII signifies TNT’s thirteenth studio album and the first to feature new Vocalist Baol Bardot Bulsara.Hailing from Trondheim, Norway, TNT was formed in 1982 by founding members Ronni Le Tekrø (guitar), Diesel Dahl (drums), Steinar Eikum (bass), and Dag Ingebrigtsen (vocals/rhythm Guitar). Though considered a Hard Rock/Glam Rock band, TNT’s sound lands on the ‘lighter’ side of the Hard Rock spectrum from peers like Twisted Sister or Van Halen – resonating more along the lines of Journey (“Chain Reaction”).After signing on the dotted line with Polygram Records, TNT released their first studio album, 1982’s TNT, the only album to feature Ingebrigtsen on Vocals prior to the singer being replaced by new frontman Tony Harnell. Making his debut on 1984’s Knights of the New Thunder, Harnell would become a part of TNT’s classic lineup, seeing the band’s music videos in regular rotation on MTV and nearly 5 million albums sold around the globe.For reasons both personal and professional, Harnell parted ways with TNT in 2006. Almost immediately, TNT hired British Vocalist Tony Mills who played in the band until his departure in 2013. Between 2013 and 2017, Harnell was in and out of the TNT lineup, even taking a brief stint fronting Skid Row for six months in 2015.In 2016, TNT hired Bassist Ove Husemoen and Harnell rejoined the band, but on October 11, 2017, TNT released a statement explaining Harnell had again left the band. Whether or not Harnell will return to TNT in the future remains to be seen. One of the hardest working bands in Rock, TNT carried on, and on November 22, 2017, introduced their newest singer, Spanish Vocalist Baol Bardot Bulsara, who debuted to a crowd of 8,000 fans while TNT played support to The Scorpions in Oslo, Norway. Just what the doctor ordered, Bulsara’s vocals fit TNT’s musical style like a glove, and Bulsara possesses a pleasing and engaging falsetto – highly comparable to Steve Perry (Journey).A refreshing and diverse formula, XIII is a polished album which keeps you listening as the tracks go from tender uptempo ballads to catchy Rock numbers. Starting off strong, the engaging “We’re Gonna Make It” sets the precedent for the entire album. “Not Feeling Anything” belongs in a 1980’s movie, strikingly reminiscent of Kenny Loggins’ “Danger Zone” from the 1986 film Top Gun. A steady rocker, “Fair Warning” contains a well-paced groove and warns something big is coming. Up next, “It’s Electric” embodies an affecting groove and some good musical nuances to add some flavor to a track that may remind listeners of the band Extreme (“Get The Funk Out,” “Rest In Peace”). “Where You Belong” places Bulsara’s gratifying pipes on display before “Can’t Breathe Anymore,” and, a style of song on every ’80s Arena Rock album, the anthemic “Get Ready For Some Hard Rock.”Moving along, “People, Come Together” proves the most dynamic track on XIII, asking folks to unite as one. A good solid rocker of love, “Tears In My Eyes” has a melody reminiscent of Stryper’s hit “Calling On You.” At first sight, the title “17th of May” is the same date we tragically lost the great Chris Cornell, however, this upbeat Rock track about taking on the world seems to have nothing to do with the late Soundgarden vocalist. Thereafter, the Pop Rock elements of “Catch A Wave” and the enormous ballad “Sunshine” close out TNT’s thirteenth chapter.Overall, from beginning to end, TNT’s XIII offers a thought-provoking collection of Arena Rock songs touched by the right magic chords to engage a listener. Whether the song is based in heartbreak or enjoying life’s pleasures, Bulsara soars as TNT’s charismatic new vocalist, and, even with a whisper, Bulsara shows an irresistible and impassioned range. Furthermore, the combination of Le Tekrø, Dahl, and Husemoen are superb in displaying a natural talent for creating inviting melodies and esthetic song arrangements. Worth checking out, CrypticRock gives XIII 4 out of 5 stars.

+ Video "Not Feeling Anything" (Official Video)